Incidence of Augmentation in Primary Restless Legs Syndrome Patients May Not Be That High: Evidence From A Systematic Review and Meta-Analysis 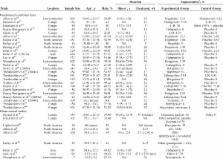 Augmentation is a common complication of primary restless legs syndrome (RLS) during treatment; however, its incidence rate remains unclear.

The aim of this study is investigate the rate of augmentation during RLS treatment.

No restrictions regarding intervention types were applied.

Three investigators independently extracted and pooled the data to analyze the augmentation rate of the total sample and of patient subgroups with different interventions, treatment durations and drug regimens and different geographic origins. Fixed-effects or random-effects model was used for pooled analysis.

The main limitations are that the augmentation rates were not evaluated according to drug dosage, gender, and age and symptom severity.

Approximately 5 to 6 in 100 RLS patients developed augmentation during treatment.

Claudia Trenkwalder,  Walter Paulus (2010)
Restless legs syndrome (RLS) is a somatosensory network disorder that is clinically diagnosed according to four main criteria: an urge to move the legs, usually associated with unpleasant leg sensations; induction or exacerbation of symptoms by rest; symptom relief on activity; and diurnal fluctuations in symptoms with worsening in the evening and at night. Genetic variants in four chromosomal regions have been identified that increase the risk of RLS. In addition, various different lesions, ranging from peripheral neuropathies to spinal cord lesions or alterations of brain metabolism, are implicated in RLS. In most cases, sleep disorders with frequent sleep fragmentation and characteristic periodic limb movements during sleep can be identified during a polysomnographic recording. The first-line drugs for RLS are dopaminergic agents, which are effective in low to moderate doses. Alternative or additional treatments include opioids and anticonvulsants. Augmentation-paradoxical worsening of symptoms by dopaminergic treatment-is the main problem encountered in difficult-to-treat patients. Iron deficiency must be identified and treated by supplementation, both to improve RLS symptoms and to potentially lower the risk of augmentation. Here, we review the latest studies pertaining to the pathophysiology, clinical presentation and management of RLS.

Nancy Hernandez-Chan,  Benedicte Y. De Winter,  Diego Garcia Borreguero … (2002)
To assess the effects of gabapentin on sensory and motor symptoms in patients with restless legs syndrome (RLS). Patients with RLS (22 idiopathic, 2 secondary to iron deficiency) were randomized and treated for 6 weeks with either gabapentin or placebo. After a 1-week washout they crossed over to the alternative treatment for 6 weeks. Patients were rated at baseline and at scheduled intervals by the RLS Rating Scale, Clinical Global Impression, pain analogue scale, and Pittsburgh Sleep Quality Index. At the end of each treatment period, all-night polysomnography was performed. Compared to placebo, gabapentin was associated with reduced symptoms on all rating scales. In addition, sleep studies showed a significantly reduced periodic leg movements during sleep (PLMS) index and improved sleep architecture (increased total sleep time, sleep efficiency, and slow wave sleep, and decreased stage 1 sleep). Patients whose symptoms included pain benefited most from gabapentin. The mean effective dosage at the end of the 6-week treatment period was 1,855 mg, although therapeutic effects were already observed at the end of week 4 (1,391 mg). Gabapentin improves sensory and motor symptoms in RLS and also improves sleep architecture and PLMS.