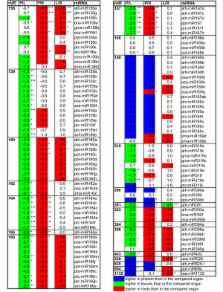 Nutrient availabilities and needs have to be tightly coordinated between organs to ensure a balance between uptake and consumption for metabolism, growth, and defense reactions. Since plants often have to grow in environments with sub-optimal nutrient availability, a fine tuning is vital. To achieve this, information has to flow cell-to-cell and over long-distance via xylem and phloem. Recently, specific miRNAs emerged as a new type of regulating molecules during stress and nutrient deficiency responses, and miR399 was suggested to be a phloem-mobile long-distance signal involved in the phosphate starvation response.

We used miRNA microarrays containing all known plant miRNAs and a set of unknown small (s) RNAs earlier cloned from Brassica phloem sap [ 1], to comprehensively analyze the phloem response to nutrient deficiency by removing sulfate, copper or iron, respectively, from the growth medium. We show that phloem sap contains a specific set of sRNAs that is distinct from leaves and roots, and that the phloem also responds specifically to stress. Upon S and Cu deficiencies phloem sap reacts with an increase of the same miRNAs that were earlier characterized in other tissues, while no clear positive response to -Fe was observed. However, -Fe led to a reduction of Cu- and P-responsive miRNAs. We further demonstrate that under nutrient starvation miR399 and miR395 can be translocated through graft unions from wild type scions to rootstocks of the miRNA processing hen1-1 mutant. In contrast, miR171 was not transported. Translocation of miR395 led to a down-regulation of one of its targets in rootstocks, suggesting that this transport is of functional relevance, and that miR395, in addition to the well characterized miR399, could potentially act as a long-distance information transmitter.

Phloem sap contains a specific set of sRNAs, of which some specifically accumulate in response to nutrient deprivation. From the observation that miR395 and miR399 are phloem-mobile in grafting experiments we conclude that translocatable miRNAs might be candidates for information-transmitting molecules, but that grafting experiments alone are not sufficient to convincingly assign a signaling function.

A diverse and evolutionarily fluid set of microRNAs in Arabidopsis thaliana.

Jerry Trejo,  David Bartel,  R. Rajagopalan … (2006)
To better understand the diversity of small silencing RNAs expressed in plants, we employed high-throughput pyrosequencing to obtain 887,000 reads corresponding to Arabidopsis thaliana small RNAs. They represented 340,000 unique sequences, a substantially greater diversity than previously obtained in any species. Most of the small RNAs had the properties of heterochromatic small interfering RNAs (siRNAs) associated with DNA silencing in that they were preferentially 24 nucleotides long and mapped to intergenic regions. Their density was greatest in the proximal and distal pericentromeric regions, with only a slightly preferential propensity to match repetitive elements. Also present were 38 newly identified microRNAs (miRNAs) and dozens of other plausible candidates. One miRNA mapped within an intron of DICER-LIKE 1 (DCL1), suggesting a second homeostatic autoregulatory mechanism for DCL1 expression; another defined the phase for siRNAs deriving from a newly identified trans-acting siRNA gene (TAS4); and two depended on DCL4 rather than DCL1 for their accumulation, indicating a second pathway for miRNA biogenesis in plants. More generally, our results revealed the existence of a layer of miRNA-based control beyond that found previously that is evolutionarily much more fluid, employing many newly emergent and diverse miRNAs, each expressed in specialized tissues or at low levels under standard growth conditions.

Specific effects of microRNAs on the plant transcriptome.

Rebecca Schwab,  Javier F. Palatnik,  Markus Riester … (2005)
Most plant microRNAs (miRNAs) have perfect or near-perfect complementarity with their targets. This is consistent with their primary mode of action being cleavage of target mRNAs, similar to that induced by perfectly complementary small interfering RNAs (siRNAs). However, there are natural targets with up to five mismatches. Furthermore, artificial siRNAs can have substantial effects on so-called off-targets, to which they have only limited complementarity. By analyzing the transcriptome of plants overexpressing different miRNAs, we have deduced a set of empirical parameters for target recognition. Compared to artificial siRNAs, authentic plant miRNAs appear to have much higher specificity, which may reflect their coevolution with the remainder of the transcriptome. We also demonstrate that miR172, previously thought to act primarily by translational repression, can efficiently guide mRNA cleavage, although the effects on steady-state levels of target transcripts are obscured by strong feedback regulation. This finding unifies the view of plant miRNA action.

Protocol: a highly sensitive RT-PCR method for detection and quantification of microRNAs

Erika Varkonyi-Gasic,  Rongmei Wu,  Marion Wood … (2007)
MicroRNAs (miRNAs) are a class of small non-coding RNAs with a critical role in development and environmental responses. Efficient and reliable detection of miRNAs is an essential step towards understanding their roles in specific cells and tissues. However, gel-based assays currently used to detect miRNAs are very limited in terms of throughput, sensitivity and specificity. Here we provide protocols for detection and quantification of miRNAs by RT-PCR. We describe an end-point and real-time looped RT-PCR procedure and demonstrate detection of miRNAs from as little as 20 pg of plant tissue total RNA and from total RNA isolated from as little as 0.1 μl of phloem sap. In addition, we have developed an alternative real-time PCR assay that can further improve specificity when detecting low abundant miRNAs. Using this assay, we have demonstrated that miRNAs are differentially expressed in the phloem sap and the surrounding vascular tissue. This method enables fast, sensitive and specific miRNA expression profiling and is suitable for facilitation of high-throughput detection and quantification of miRNA expression.