Critical roles of nardilysin in the maintenance of body temperature homoeostasis 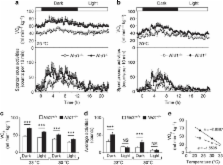 Body temperature homoeostasis in mammals is governed centrally through the regulation of shivering and non-shivering thermogenesis and cutaneous vasomotion. Non-shivering thermogenesis in brown adipose tissue (BAT) is mediated by sympathetic activation, followed by PGC-1α induction, which drives UCP1. Here we identify nardilysin ( Nrd1 and NRDc) as a critical regulator of body temperature homoeostasis. Nrd1 −/− mice show increased energy expenditure owing to enhanced BAT thermogenesis and hyperactivity. Despite these findings, Nrd1 −/− mice show hypothermia and cold intolerance that are attributed to the lowered set point of body temperature, poor insulation and impaired cold-induced thermogenesis. Induction of β3-adrenergic receptor, PGC-1α and UCP1 in response to cold is severely impaired in the absence of NRDc. At the molecular level, NRDc and PGC-1α interact and co-localize at the UCP1 enhancer, where NRDc represses PGC-1α activity. These findings reveal a novel nuclear function of NRDc and provide important insights into the mechanism of thermoregulation.

The precise regulation of mammalian body temperature is important for survival. Here the authors show that the peptidase nardilysin represses the transcription factor PGC-1α, and identify nardilysin as a regulator of basal body temperature, cold-induced thermogenesis and body insulation.

S Jäger,  Christoph Handschin,  Julie St-Pierre … (2007)
Activation of AMP-activated kinase (AMPK) in skeletal muscle increases glucose uptake, fatty acid oxidation, and mitochondrial biogenesis by increasing gene expression in these pathways. However, the transcriptional components that are directly targeted by AMPK are still elusive. The peroxisome-proliferator-activated receptor gamma coactivator 1alpha (PGC-1alpha) has emerged as a master regulator of mitochondrial biogenesis; furthermore, it has been shown that PGC-1alpha gene expression is induced by exercise and by chemical activation of AMPK in skeletal muscle. Using primary muscle cells and mice deficient in PGC-1alpha, we found that the effects of AMPK on gene expression of glucose transporter 4, mitochondrial genes, and PGC-1alpha itself are almost entirely dependent on the function of PGC-1alpha protein. Furthermore, AMPK phosphorylates PGC-1alpha directly both in vitro and in cells. These direct phosphorylations of the PGC-1alpha protein at threonine-177 and serine-538 are required for the PGC-1alpha-dependent induction of the PGC-1alpha promoter. These data indicate that AMPK phosphorylation of PGC-1alpha initiates many of the important gene regulatory functions of AMPK in skeletal muscle.

Mice lacking mitochondrial uncoupling protein are cold-sensitive but not obese.

S Enerbäck,  Ronald Harper,  C Guerra … (1997)
The mitochondrial uncoupling protein (UCP) in the mitochondrial inner membrane of mammalian brown adipose tissue generates heat by uncoupling oxidative phosphorylation. This process protects against cold and regulates energy balance. Manipulation of thermogenesis could be an effective strategy against obesity. Here we determine the role of UCP in the regulation of body mass by targeted inactivation of the gene encoding it. We find that UCP-deficient mice consume less oxygen after treatment with a beta3-adrenergic-receptor agonist and that they are sensitive to cold, indicating that their thermoregulation is defective. However, this deficiency caused neither hyperphagia nor obesity in mice fed on either a standard or a high-fat diet. We propose that the loss of UCP may be compensated by UCP2, a newly discovered homologue of UCP; this gene is ubiquitously expressed and is induced in the brown fat of UCP-deficient mice.

Nonshivering thermogenesis and its adequate measurement in metabolic studies.

Barbara Cannon,  Jan Nedergaard (2011)
Alterations in nonshivering thermogenesis are presently discussed as being both potentially causative of and able to counteract obesity. However, the necessity for mammals to defend their body temperature means that the ambient temperature profoundly affects the outcome and interpretation of metabolic experiments. An adequate understanding and assessment of nonshivering thermogenesis is therefore paramount for metabolic studies. Classical nonshivering thermogenesis is facultative, i.e. it is only activated when an animal acutely requires extra heat (switched on in minutes), and adaptive, i.e. it takes weeks for an increase in capacity to develop. Nonshivering thermogenesis is fully due to brown adipose tissue activity; adaptation corresponds to the recruitment of this tissue. Diet-induced thermogenesis is probably also facultative and adaptive and due to brown adipose tissue activity. Although all mammals respond to injected/infused norepinephrine (noradrenaline) with an increase in metabolism, in non-adapted mammals this increase mainly represents the response of organs not involved in nonshivering thermogenesis; only the increase after adaptation represents nonshivering thermogenesis. Thermogenesis (metabolism) should be expressed per animal, and not per body mass [not even to any power (0.75 or 0.66)]. A 'cold tolerance test' does not examine nonshivering thermogenesis capacity; rather it tests shivering capacity and endurance. For mice, normal animal house temperatures are markedly below thermoneutrality, and the mice therefore have a metabolic rate and food consumption about 1.5 times higher than their intrinsic requirements. Housing and examining mice at normal house temperatures carries a high risk of identifying false positives for intrinsic metabolic changes; in particular, mutations/treatments that affect the animal's insulation (fur, skin) may lead to such problems. Correspondingly, true alterations in intrinsic metabolic rate remain undetected when metabolism is examined at temperatures below thermoneutrality. Thus, experiments with animals kept and examined at thermoneutrality are likely to yield an improved possibility of identifying agents and genes important for human energy balance.

This work is licensed under a Creative Commons Attribution-NonCommercial-NoDerivs 3.0 Unported License. To view a copy of this license, visit http://creativecommons.org/licenses/by-nc-nd/3.0/