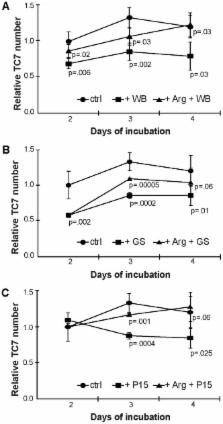 In the field of infectious diseases the multifaceted amino acid arginine has reached special attention as substrate for the host´s production of the antimicrobial agent nitric oxide (NO). A variety of infectious organisms interfere with this part of the host immune response by reducing the availability of arginine. This prompted us to further investigate additional roles of arginine during pathogen infections. As a model we used the intestinal parasite Giardia intestinalis that actively consumes arginine as main energy source and secretes an arginine-consuming enzyme, arginine deiminase (ADI). Reduced intestinal epithelial cell (IEC) proliferation is a common theme during bacterial and viral intestinal infections, but it has never been connected to arginine-consumption. Our specific question was thereby, whether the arginine-consumption by Giardia leads to reduced IEC proliferation, in addition to NO reduction. In vitro cultivation of human IEC lines in arginine-free or arginine/citrulline-complemented medium, as well as in interaction with different G. intestinalis isolates, were used to study effects on host cell replication by MTT assay. IEC proliferation was further analyzed by DNA content analysis, polyamine measurements and expressional analysis of cell cycle regulatory genes. IEC proliferation was reduced upon arginine-withdrawal and also in an arginine-dependent manner upon interaction with G. intestinalis or addition of Giardia ADI. We show that arginine-withdrawal by intestinal pathogens leads to a halt in the cell cycle in IECs through reduced polyamine levels and upregulated cell cycle inhibitory genes. This is of importance with regards to intestinal tissue homeostasis that is affected through reduced cell proliferation. Thus, the slower epithelial cell turnover helps the pathogen to maintain a more stable niche for colonization. This study also shows why supplementation therapy of diarrhea patients with arginine/citrulline is helpful and that citrulline especially should gain further attention in future treatment strategies.

The Caco-2 cell line as a model of the intestinal barrier: influence of cell and culture-related factors on Caco-2 cell functional characteristics.

Y Sambuy,  G Ranaldi,  I Angelis … (2004)
The human intestinal Caco-2 cell line has been extensively used over the last twenty years as a model of the intestinal barrier. The parental cell line, originally obtained from a human colon adenocarcinoma, undergoes in culture a process of spontaneous differentiation that leads to the formation of a monolayer of cells, expressing several morphological and functional characteristics of the mature enterocyte. Culture-related conditions were shown to influence the expression of these characteristics, in part due to the intrinsic heterogeneity of the parental cell line, leading to selection of sub-populations of cells becoming prominent in the culture. In addition, several clonal cell lines have been isolated from the parental line, exhibiting in general a more homogeneous expression of differentiation traits, while not always expressing all characteristics of the parental line. Culture-related conditions, as well as the different Caco-2 cell lines utilized in different laboratories, often make it extremely difficult to compare results in the literature. This review is aimed at summarizing recent, or previously unreviewed, data from the literature on the effects of culture-related factors and the influence of line sub-types (parental vs. different clonal lines) on the expression of differentiation traits important for the use of Caco-2 cells as a model of the absorptive and defensive properties of the intestinal mucosa. Since the use of Caco-2 cells has grown exponentially in recent years, it is particularly important to highlight these methodological aspects in order to promote the standardization and optimisation of this intestinal model.

Almost all about citrulline in mammals.

Emmanuel Curis,  C Moinard,  S Osowska … (2005)
Citrulline (Cit, C6H13N3O3), which is a ubiquitous amino acid in mammals, is strongly related to arginine. Citrulline metabolism in mammals is divided into two fields: free citrulline and citrullinated proteins. Free citrulline metabolism involves three key enzymes: NO synthase (NOS) and ornithine carbamoyltransferase (OCT) which produce citrulline, and argininosuccinate synthetase (ASS) that converts it into argininosuccinate. The tissue distribution of these enzymes distinguishes three "orthogonal" metabolic pathways for citrulline. Firstly, in the liver, citrulline is locally synthesized by OCT and metabolized by ASS for urea production. Secondly, in most of the tissues producing NO, citrulline is recycled into arginine via ASS to increase arginine availability for NO production. Thirdly, citrulline is synthesized in the gut from glutamine (with OCT), released into the blood and converted back into arginine in the kidneys (by ASS); in this pathway, circulating citrulline is in fact a masked form of arginine to avoid liver captation. Each of these pathways has related pathologies and, even more interestingly, citrulline could potentially be used to monitor or treat some of these pathologies. Citrulline has long been administered in the treatment of inherited urea cycle disorders, and recent studies suggest that citrulline may be used to control the production of NO. Recently, citrulline was demonstrated as a potentially useful marker of short bowel function in a wide range of pathologies. One of the most promising research directions deals with the administration of citrulline as a more efficient alternative to arginine, especially against underlying splanchnic sequestration of amino acids. Protein citrullination results from post-translational modification of arginine; that occurs mainly in keratinization-related proteins and myelins, and insufficiencies in this citrullination occur in some auto-immune diseases such as rheumatoid arthritis, psoriasis or multiple sclerosis.

Thomas J Coates,  Regina Gandour-Edwards,  U. Jung … (2009)
Arginine deprivation as an anticancer therapy has historically been met with limited success. The development of pegylated arginine deiminase (ADI-PEG20) has renewed interest in arginine deprivation for the treatment of some cancers. The efficacy of ADI-PEG20 is directly correlated with argininosuccinate synthetase (ASS) deficiency. CWR22Rv1 prostate cancer cells do not express ASS, the rate-limiting enzyme in arginine synthesis, and are susceptible to ADI-PEG20 in vitro. Interestingly, apoptosis by 0.3 microg/mL ADI-PEG20 occurs 96 hours posttreatment and is caspase independent. The effect of ADI-PEG20 in vivo reveals reduced tumor activity by micropositron emission tomography as well as reduced tumor growth as a monotherapy and in combination with docetaxel against CWR22Rv1 mouse xenografts. In addition, we show autophagy is induced by single amino acid depletion by ADI-PEG20. Here, autophagy is an early event that is detected within 1 to 4 hours of 0.3 microg/mL ADI-PEG20 treatment and is an initial protective response to ADI-PEG20 in CWR22Rv1 cells. Significantly, the inhibition of autophagy by chloroquine and Beclin1 siRNA knockdown enhances and accelerates ADI-PEG20-induced cell death. PC3 cells, which express reduced ASS, also undergo autophagy and are responsive to autophagy inhibition and ADI-PEG20 treatment. In contrast, LNCaP cells highly express ASS and are therefore resistant to both ADI-PEG20 and autophagic inhibition. These data point to an interrelationship among ASS deficiency, autophagy, and cell death by ADI-PEG20. Finally, a tissue microarray of 88 prostate tumor samples lacked expression of ASS, indicating ADI-PEG20 is a potential novel therapy for the treatment of prostate cancer

BS was funded by a grant from the Swiss National Foundation (SNF PBBEP3_133500). MCM received a stipend from Consejo Nacional de Investigaciones Científicas y Técnicas (Argentina). This work was carried out within a grant from Vetenskapsrådet Medicin (VR-M 2009–3492,Sweden). The funders had no role in study design, data collection and analysis, decision to publish, or preparation of the manuscript.