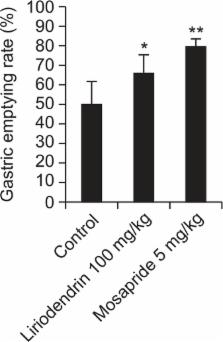 In this study, we investigated the inhibitory activities on gastritis and gastric ulcer using liriodendrin which is a constituent isolated from Kalopanax pictus. To elucidate its abilities to prevent gastric injury, we measured the quantity of prostaglandin E 2 (PGE 2) as the protective factor, and we assessed inhibition of activities related to excessive gastric acid be notorious for aggressive factor and inhibition of Helicobacter pylori ( H. pylori) colonization known as a cause of chronic gastritis, gastric ulcer, and gastric cancer. Liriodendrin exhibited higher PGE 2 level than rebamipide used as a positive control group at the dose of 500 μM. It was also exhibited acid-neutralizing capacity (10.3%) and H +/K +-ATPase inhibition of 42.6% (500 μM). In pylorus-ligated rats, liriodendrin showed lower volume of gastric juice (4.38 ± 2.14 ml), slightly higher pH (1.53 ± 0.41), and smaller total acid output (0.47 ± 0.3 mEq/4 hrs) than the control group. Furthermore liriodendrin inhibited colonization of H. pylori effectively. In vivo test, liriodendrin significantly inhibited both of HCl/EtOH-induced gastritis (46.9 %) and indomethacin-induced gastric ulcer (46.1%). From these results, we suggest that liriodendrin could be utilized for the treatment and/or protection of gastritis and gastric ulcer.

Philippe A. Robert,  A J Hanchar,  J E Nezamis … (1979)
Oral administration to fasted rats of either absolute ethanol, 0.6 N hydrochloric acid, 0.2 N sodium hydroxide, 25% sodium chloride, or boiling water produced extensive necrosis of the gastric mucosa. Pretreatment with several prostaglandins of the A, E, or F type, either orally or subcutaneously, prevented such necrosis, and the effect was dose-dependent. This property of prostaglandins is called "cytoprotection." The protective effect against oral administration of absolute ethanol was already maximal 1 min after PGE2 given orally, and 15-30 min after PGE2 given subcutaneously. Cytoprotection by prostaglandins is unrelated to the inhibition of gastric acid secretion since, (a) it is maximal at doses that have no effect on gastric secretion, and (b) anti-secretory compounds (cimetidine, methscopolamine bromide) and antacids are not cytoprotective. Although the mechanism of gastric cytoprotection is unknown, prostaglandins appear to increase the resistance of gastric mucosal cells to the necrotizing effect of strong irritants. These results suggest that certain prostaglandins, by a mechanism other than the inhibition of gastric acid secretion, maintain the cellular integrity of the gastric mucosa, and might be beneficial in the treatment of a variety of diseases in which gastric mucosal injury is present.

Effect of polyamines on acidified ethanol-induced gastric lesions in rats.