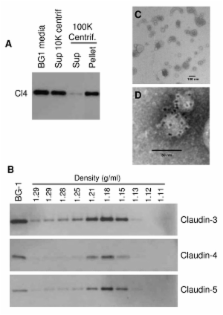 Claudin protein shedding from cells was examined by immunoblotting of conditioned culture media. The presence of claudins in exosomes released from ovarian cancer cells was demonstrated by sucrose gradient separation and immunogold electron microscopy experiments. Claudin-4-containing exosomes in the plasma of ovarian cancer patients were evaluated in a pilot panel of 63 ovarian cancer patients and 50 healthy volunteers. The CA125 marker was also assessed in these samples and compared with claudin-4 positivity.

We show that full-length claudins can be shed from ovarian cancer cells in culture and found in the media as part of small lipid vesicles known as exosomes. Moreover, 32 of 63 plasma samples from ovarian cancer patients exhibited the presence of claudin-4-containing exosomes. In contrast, only one of 50 samples from individuals without cancer exhibited claudin-4-positive exosomes. In our small panel, at a specificity of 98%, the claudin-4 and CA125 tests had sensitivities of 51% and 71%, respectively. The two tests did not appear to be independent and were strongly correlated.

A. Jemal,  R. Siegel,  E. Ward … (2008)
Each year, the American Cancer Society estimates the number of new cancer cases and deaths expected in the United States in the current year and compiles the most recent data on cancer incidence, mortality, and survival based on incidence data from the National Cancer Institute, Centers for Disease Control and Prevention, and the North American Association of Central Cancer Registries and mortality data from the National Center for Health Statistics. Incidence and death rates are age-standardized to the 2000 US standard million population. A total of 1,437,180 new cancer cases and 565,650 deaths from cancer are projected to occur in the United States in 2008. Notable trends in cancer incidence and mortality include stabilization of incidence rates for all cancer sites combined in men from 1995 through 2004 and in women from 1999 through 2004 and a continued decrease in the cancer death rate since 1990 in men and since 1991 in women. Overall cancer death rates in 2004 compared with 1990 in men and 1991 in women decreased by 18.4% and 10.5%, respectively, resulting in the avoidance of over a half million deaths from cancer during this time interval. This report also examines cancer incidence, mortality, and survival by site, sex, race/ethnicity, education, geographic area, and calendar year, as well as the proportionate contribution of selected sites to the overall trends. Although much progress has been made in reducing mortality rates, stabilizing incidence rates, and improving survival, cancer still accounts for more deaths than heart disease in persons under age 85 years. Further progress can be accelerated by supporting new discoveries and by applying existing cancer control knowledge across all segments of the population.

Mojgan Movassagh,  Caroline Flament,  Noel E C Schartz … (2002)
Exosomes derived from tumours are small vesicles released in vitro by tumour cell lines in culture supernatants. To assess the role of these exosomes in vivo, we examined malignant effusions for their presence. We also investigated whether these exosomes could induce production of tumour-specific T cells when pulsed with dendritic cells. We isolated exosomes by ultracentrifugation on sucrose and D(2)O gradients of 11 malignant effusions. We characterised exosomes with Western blot analyses, immunoelectron microscopy, and in-vitro stimulations of autologous T lymphocytes. Malignant effusions accumulate high numbers of membrane vesicles that have a mean diameter of 80 nm (SD 30). These vesicles have antigen-presenting molecules (MHC class-I heat-shock proteins), tetraspanins (CD81), and tumour antigens (Her2/Neu, Mart1, TRP, gp100). These criteria, including their morphological characteristics, indicate the similarities between these vesicles and exosomes. Exosomes from patients with melanoma deliver Mart1 tumour antigens to dendritic cells derived from monocytes (MD-DCs) for cross presentation to clones of cytotoxic T lymphocytes specific to Mart1. In seven of nine patients with cancer, lymphocytes specific to the tumour could be efficiently expanded from peripheral blood cells by pulsing autologous MD-DCs with autologous ascitis exosomes. In one patient tested, we successfully expanded a restricted T-cell repertoire, which could not be recovered carcinomatosis nodules. Exosomes derived from tumours accumulate in ascites from patients with cancer. Ascitis exosomes are a natural and new source of tumour-rejection antigens, opening up new avenues for immunisation against cancers.

Patrice J. Morin (2005)
The tight junction proteins claudins are abnormally regulated in several human cancers. In particular, claudin-3 and claudin-4 are frequently overexpressed in several neoplasias, including ovarian, breast, pancreatic, and prostate cancers. Although the exact roles of these proteins in tumorigenesis are still being uncovered, it is clear that they represent promising targets for cancer detection, diagnosis, and therapy.