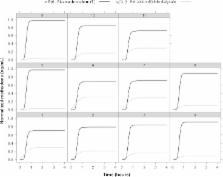 There is a need to have a model to study methadone’s losses during hemodialysis to provide informed methadone dose recommendations for the practitioner.

ODE/PDE modeling of methadone’s hemodialysis is a new approach to study methadone’s removal, in particular, and opioid removal, in general, in patients with end-stage renal disease on hemodialysis. ODE/PDE modeling accurately quantified the fundamental phenomena of methadone’s mass transfer during hemodialysis. This methodology may lead to development of optimally designed intradialytic opioid treatment protocols, and allow dynamic monitoring of outflow plasma opioid concentrations for model predictive control during dialysis in humans.

Interindividual variability of the clinical pharmacokinetics of methadone: implications for the treatment of opioid dependence.

Thierry Buclin,  Pierre Baumann,  Chin B. Eap (2002)
Methadone is widely used for the treatment of opioid dependence. Although in most countries the drug is administered as a racemic mixture of (R)- and (S)- methadone, (R)-methadone accounts for most, if not all, of the opioid effects. Methadone can be detected in the blood 15-45 minutes after oral administration, with peak plasma concentration at 2.5-4 hours. Methadone has a mean bioavailability of around 75% (range 36-100%). Methadone is highly bound to plasma proteins, in particular to alpha(1)-acid glycoprotein. Its mean free fraction is around 13%, with a 4-fold interindividual variation. Its volume of distribution is about 4 L/kg (range 2-13 L/kg). The elimination of methadone is mediated by biotransformation, followed by renal and faecal excretion. Total body clearance is about 0.095 L/min, with wide interindividual variation (range 0.02-2 L/min). Plasma concentrations of methadone decrease in a biexponential manner, with a mean value of around 22 hours (range 5-130 hours) for elimination half-life. For the active (R)-enantiomer, mean values of around 40 hours have been determined. Cytochrome P450 (CYP) 3A4 and to a lesser extent 2D6 are probably the main isoforms involved in methadone metabolism. Rifampicin (rifampin), phenobarbital, phenytoin, carbamazepine, nevirapine, and efavirenz decrease methadone blood concentrations, probably by induction of CYP3A4 activity, which can result in severe withdrawal symptoms. Inhibitors of CYP3A4, such as fluconazole, and of CYP2D6, such as paroxetine, increase methadone blood concentrations. There is an up to 17-fold interindividual variation of methadone blood concentration for a given dosage, and interindividual variability of CYP enzymes accounts for a large part of this variation. Since methadone probably also displays large interindividual variability in its pharmacodynamics, methadone treatment must be individually adapted to each patient. Because of the high morbidity and mortality associated with opioid dependence, it is of major importance that methadone is used at an effective dosage in maintenance treatment: at least 60 mg/day, but typically 80-100 mg/day. Recent studies also show that a subset of patients might benefit from methadone dosages larger than 100 mg/day, many of them because of high clearance. In clinical management, medical evaluation of objective signs and subjective symptoms is sufficient for dosage titration in most patients. However, therapeutic drug monitoring can be useful in particular situations. In the case of non-response trough plasma concentrations of 400 microg/L for (R,S)-methadone or 250 microg/L for (R)-methadone might be used as target values.

C. P. R. Coccia,  Alfio Bertolini,  Emilio Sternieri … (2004)
The pharmacokinetics of methadone varies greatly from person to person; so, after the administration of the same dose, considerably different concentrations are obtained in different subjects, and the pharmacological effect may be too small in some patients, too strong and prolonged in others. Methadone is mostly metabolised in the liver; the main step consists in the N-demethylation by CYP3A4 to EDDP (2-ethylidene-1,5-dimethyl-3,3-diphenylpyrrolidine), an inactive metabolite. The activity of CYP3A4 varies considerably among individuals, and such variability is the responsible for the large differences in methadone bioavailability. CYP2D6 and probably CYP1A2 are also involved in methadone metabolism. During maintenance treatment with methadone, treatment with other drugs may be necessary due to the frequent comorbidity of drug addicts: psychotropic drugs, antibiotics, anticonvulsants and antiretroviral drugs, which can cause pharmacokinetic interactions. In particular, antiretrovirals, which are CYP3A4 inducers, can decrease the levels of methadone, so causing withdrawal symptoms. Buprenorphine, too, is metabolised by CYP3A4, and may undergo the same interactions as methadone. Since it is impossible to foresee the time-lapse from the administration of another drug to the appearing of withdrawal symptoms, nor how much the daily dose of methadone should be increased in order to prevent them, patients taking combined drug treatments must be carefully monitored. The so far known pharmacokinetic drug-drug interactions of methadone do not have life-threatening consequences for the patients, but they usually cause a decrease of the concentrations and of the effects of the drug, which in turn can cause symptoms of withdrawal and increase the risk of relapse into heroin abuse.

The opioid system in the gastrointestinal tract.

C Sternini,  S Patierno,  I Selmer … (2004)
Mu-, delta- and kappa-opioid receptors (ORs) mediate the effects of endogenous opioids and opiate drugs. Here we report (1) the distribution of muOR in the guinea-pig and human gastrointestinal tract in relation to endogenous ligands, to functionally distinct structures in the gut and to deltaOR and kappaOR; and (2) the ligand-induced muOR endocytosis in enteric neurones using in vitro and in vivo models. In the guinea pig, muOR immunoreactivity is confined mainly to the myenteric plexus. MuOR myenteric neurones are most numerous in the small intestine, followed by the stomach and the proximal colon. MuOR immunoreactive fibres are dense in the muscle layer and the deep muscular plexus, where they are in close association with interstitial cells of Cajal. This distribution closely matches the pattern of enkephalin. MuOR enteric neurones comprise functionally distinct populations of neurones of the ascending and descending pathways of the peristaltic reflex. In human gut, muOR immunoreactivity is localized to myenteric and submucosal neurones and to immune cells of the lamina propria. DeltaOR immunoreactivity is located in both plexuses where it is predominantly in varicose fibres in the plexuses, muscle and mucosa, whereas kappaOR immunoreactivity appears to be confined to the myenteric plexus and to bundles of fibres in the muscle. MuOR undergoes endocytosis in a concentration-dependent manner, in vitro and in vivo. Pronounced muOR endocytosis is observed in neurones from animals that underwent abdominal surgery that has been shown to induce delay in gastrointestinal transit. We can conclude that all three ORs are localized to the enteric nervous system with differences among species, and that muOR endocytosis can be utilized as a means to visualize enteric neurones activated by opioids and sites of opioid release.