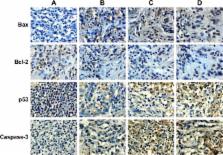 The aim of this study was to evaluate the anticancer potential of Kelussia odoratissima. Several in vitro and in vivo biological assays were applied to explore the direct effect of an extract and bioactive compound of this plant against breast cancer cells and its possible mechanism of action.

K. odoratissima methanol extract (KME) was prepared, and MTT assay was used to evaluate the cytotoxicity. To identify the cytotoxic compound, a bioassay-guided investigation was performed on methanol extract. 8-Hydroxy-ar-turmerone was isolated as a bioactive compound. In vivo study was performed in the breast cancer rat model. LA7 cell line was used to induce the breast tumor. Histopathological and expression changes of PCNA, Bcl-2, Bax, p27 and p21 and caspase-3 were examined. The induction of apoptosis was tested using Annexin V-fluorescein isothiocyanate (FITC) assay. To confirm the intrinsic pathway of apoptosis, caspase-7 and caspase-9 assays were utilized. In addition, cell cycle arrest was evaluated.

Our results demonstrated that K. odoratissima has an obvious effect on the arrest of proliferation of cancer cells. It induced apoptosis, transduced the cell death signals, decreased the threshold of mitochondrial membrane potential (MMP), upregulated Bax and downregulated Bcl-2.

Fatigue in breast cancer survivors: occurrence, correlates, and impact on quality of life.

P Ganz,  Katherine Desmond,  Mindy Bower … (2000)
To describe the occurrence of fatigue in a large sample of breast cancer survivors relative to general population norms and to identify demographic, medical, and psychosocial characteristics of fatigued survivors. Breast cancer survivors in two large metropolitan areas completed standardized questionnaires as part of a survey study, including the RAND 36-item Health Survey, Center for Epidemiological Studies-Depression Scale, Breast Cancer Prevention Trial Symptom Checklist, Medical Outcomes Study Sleep Scale, and demographic and treatment-related measures. On average, the level of fatigue reported by the breast cancer survivors surveyed (N = 1,957) was comparable to that of age-matched women in the general population, although the breast cancer survivors were somewhat more fatigued than a more demographically similar reference group. Approximately one third of the breast cancer survivors assessed reported more severe fatigue, which was associated with significantly higher levels of depression, pain, and sleep disturbance. In addition, fatigued women were more bothered by menopausal symptoms and were somewhat more likely to have received chemotherapy (with or without radiation therapy) than nonfatigued women. In multivariate analyses, depression and pain emerged as the strongest predictors of fatigue. Although the majority of breast cancer survivors in this large and diverse sample did not experience heightened levels of fatigue relative to women in the general population, there was a subgroup of survivors who did report more severe and persistent fatigue. We identified characteristics of these women that may be helpful in elucidating the mechanisms underlying fatigue in this population, as well as directing intervention efforts.

New roles for p21 and p27 cell-cycle inhibitors: a function for each cell compartment?

Olivier Coqueret (2003)
Cell division relies on the activation of cyclins, which bind to cyclin-dependent kinases (CDKs) to induce cell-cycle progression towards S phase and later to initiate mitosis. Since uncontrolled cyclin-dependent kinase activity is often the cause of human cancer, their function is tightly regulated by cell-cycle inhibitors such as the p21 and p27 Cip/Kip proteins. Following anti-mitogenic signals or DNA damage, p21 and p27 bind to cyclin-CDK complexes to inhibit their catalytic activity and induce cell-cycle arrest. Interestingly, recent discoveries suggest that p21 and p27 might have new activities that are unrelated to their function as CDK inhibitors. The identification of new targets of Cip/Kip proteins as well as evidence of Cip/Kip cytoplasmic relocalization have revealed unexpected functions for these proteins in the control of CDK activation, in the regulation of apoptosis and in transcriptional activation. This article discusses recent insights into these possible additional functions of p21 and p27.

Regulation of the intrinsic apoptosis pathway by reactive oxygen species.

Pao-Chu Wu,  Shawn B. Bratton (2013)
The intrinsic apoptosis pathway is conserved from worms to humans and plays a critical role in the normal development and homeostatic control of adult tissues. As a result, numerous diseases from cancer to neurodegeneration are associated with either too little or too much apoptosis. B cell lymphoma-2 (BCL-2) family members regulate cell death, primarily via their effects on mitochondria. In stressed cells, proapoptotic BCL-2 family members promote mitochondrial outer membrane permeabilization (MOMP) and cytochrome c (cyt c) release into the cytoplasm, where it stimulates formation of the "apoptosome." This large, multimeric complex is composed of the adapter protein, apoptotic protease-activating factor-1, and the cysteine protease, caspase-9. Recent studies suggest that proteins involved in the processes leading up to (and including) formation of the apoptosome are subject to various forms of post-translational modification, including proteolysis, phosphorylation, and in some cases, direct oxidative modification. Despite intense investigation of the intrinsic pathway, significant questions remain regarding how cyt c is released from mitochondria, how the apoptosome is formed and regulated, and how caspase-9 is activated within the complex. Further studies on the biochemistry of MOMP and apoptosome formation are needed to understand the mechanisms that underpin these critical processes, and novel animal models will be necessary in the future to ascertain the importance of the many posttranslational modifications reported for BCL-2 family members and components of the apoptosome.