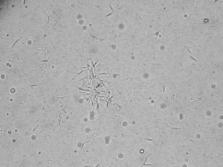 Populations of the common bed bug, Cimex lectularius, have recently undergone explosive growth. Bed bugs share many important traits with triatomine insects, but it remains unclear whether these similarities include the ability to transmit Trypanosoma cruzi, the etiologic agent of Chagas disease. Here, we show efficient and bidirectional transmission of T. cruzi between hosts and bed bugs in a laboratory environment. Most bed bugs that fed on experimentally infected mice acquired the parasite. A majority of previously uninfected mice became infected after a period of cohabitation with exposed bed bugs. T. cruzi was also transmitted to mice after the feces of infected bed bugs were applied directly to broken host skin. Quantitative bed bug defecation measures were similar to those of important triatomine vectors. Our findings suggest that the common bed bug may be a competent vector of T. cruzi and could pose a risk for vector-borne transmission of Chagas disease.

An estimate of the burden of Chagas disease in the United States.

Epidemiology of Chagas disease in non endemic countries: the role of international migration

Gabriel Schmunis (2007)
Human infection with the protozoa Trypanosoma cruzi extends through North, Central, and South America, affecting 21 countries. Most human infections in the Western Hemisphere occur through contact with infected bloodsucking insects of the triatomine species. As T. cruzi can be detected in the blood of untreated infected individuals, decades after infection took place; the infection can be also transmitted through blood transfusion and organ transplant, which is considered the second most common mode of transmission for T. cruzi. The third mode of transmission is congenital infection. Economic hardship, political problems, or both, have spurred migration from Chagas endemic countries to developed countries. The main destination of this immigration is Australia, Canada, Spain, and the United States. In fact, human infection through blood or organ transplantation, as well as confirmed or potential cases of congenital infections has been described in Spain and in the United States. Estimates reported here indicates that in Australia in 2005-2006, 1067 of the 65,255 Latin American immigrants (16 per 1000) may be infected with T. cruzi, and in Canada, in 2001, 1218 of the 131,135 immigrants (9 per 1000) whose country of origin was identified may have been also infected. In Spain, a magnet for Latin American immigrants since the 2000, 5125 of 241,866 legal immigrants in 2003 (25 per 1000), could be infected. In the United States, 56,028 to 357,205 of the 7,20 million, legal immigrants (8 to 50 per 1000), depending on the scenario, from the period 1981-2005 may be infected with T. cruzi. On the other hand, 33,193 to 336,097 of the estimated 5,6 million undocumented immigrants in 2000 (6 to 59 per 1000) could be infected. Non endemic countries receiving immigrants from the endemic ones should develop policies to protect organ recipients from T. cruzi infection, prevent tainting the blood supply with T. cruzi, and implement secondary prevention of congenital Chagas disease.

Role of saliva in blood-feeding by arthropods.