Ex vivo treatment of patient biopsies as a novel method to assess colorectal tumour response to the MEK1/2 inhibitor, Selumetinib 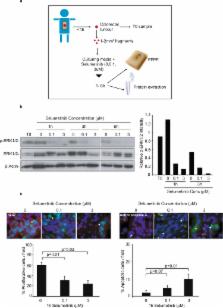 Although an array of new therapeutics has emerged for the treatment of colorectal cancer, their use is significantly impacted by variability in patient response. Better pre-clinical models could substantially improve efficacy as it may allow stratification of patients into the correct treatment regime. Here we explore acute, ex vivo treatment of fresh, surgically resected human colorectal tumour biopsies as a novel pre-clinical model for identifying patient response to specific therapeutics. The MEK1/2 inhibitor, Selumetinib (AZD6244, ARRY-142886) was used as a tool compound. Firstly, we established an acute treatment protocol and demonstrated this protocol could differentiate phenotypic and pharmacodynamic responses to Selumetinib (0–3uM). We then used the protocol to evaluate Selumetinib response in tumours from 23 colon cancer patients. These studies revealed that the agent inhibited pERK1/2 phosphorylation in all tumours, caused a significant decrease in proliferation in 5/23 (22%) tumours, and that KRAS/BRAF mutant tumours were particularly sensitive to the anti-proliferative effects of the agent. These data are consistent with data from clinical trials of Selumetinib, suggesting that acute treatment of small tumour biopsies is worthy of further exploration as a pre-clinical model to evaluate colorectal cancer response to novel therapies.

Stephanie L. Maloney,  S. Eckhardt,  Jamie Hanson … (2008)
To assess the tolerability, pharmacokinetics (PKs), and pharmacodynamics (PDs) of the mitogen-activated protein kinase kinase (MEK) 1/2 inhibitor AZD6244 (ARRY-142886) in patients with advanced cancer. In part A, patients received escalating doses to determine the maximum-tolerated dose (MTD). In both parts, blood samples were collected to assess PK and PD parameters. In part B, patients were stratified by cancer type (melanoma v other) and randomly assigned to receive the MTD or 50% MTD. Biopsies were collected to determine inhibition of ERK phosphorylation, Ki-67 expression, and BRAF, KRAS, and NRAS mutations. Fifty-seven patients were enrolled. MTD in part A was 200 mg bid, but this dose was discontinued in part B because of toxicity. The 50% MTD (100 mg bid) was well tolerated. Rash was the most frequent and dose-limiting toxicity. Most other adverse events were grade 1 or 2. The PKs were less than dose proportional, with a median half-life of approximately 8 hours and inhibition of ERK phosphorylation in peripheral-blood mononuclear cells at all dose levels. Paired tumor biopsies demonstrated reduced ERK phosphorylation (geometric mean, 79%). Five of 20 patients demonstrated >or= 50% inhibition of Ki-67 expression, and RAF or RAS mutations were detected in 10 of 26 assessable tumor samples. Nine patients had stable disease (SD) for >or= 5 months, including two patients with SD for 19 (thyroid cancer) and 22 (uveal melanoma plus renal cancer) 28-day cycles. AZD6244 was well tolerated with target inhibition demonstrated at the recommended phase II dose. PK analyses supported twice-daily dosing. Prolonged SD was seen in a variety of advanced cancers. Phase II studies are ongoing.

Massimo Loda,  Giorgia Zadra,  Valentina Vaira … (2010)
Predicting drug response in cancer patients remains a major challenge in the clinic. We have perfected an ex vivo, reproducible, rapid and personalized culture method to investigate antitumoral pharmacological properties that preserves the original cancer microenvironment. Response to signal transduction inhibitors in cancer is determined not only by properties of the drug target but also by mutations in other signaling molecules and the tumor microenvironment. As a proof of concept, we, therefore, focused on the PI3K/Akt signaling pathway, because it plays a prominent role in cancer and its activity is affected by epithelial-stromal interactions. Our results show that this culture model preserves tissue 3D architecture, cell viability, pathway activity, and global gene-expression profiles up to 5 days ex vivo. In addition, we show pathway modulation in tumor cells resulting from pharmacologic intervention in ex vivo culture. This technology may have a significant impact on patient selection for clinical trials and in predicting response to small-molecule inhibitor therapy.

Inhibition of MEK and PI3K/mTOR suppresses tumor growth but does not cause tumor regression in patient-derived xenografts of RAS-mutant colorectal carcinomas.