Practitioner Review: Pathways to care for ADHD – a systematic review of barriers and facilitators 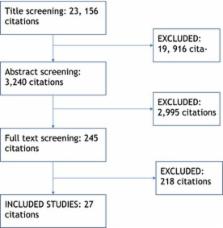 Attention‐Deficit/Hyperactivity Disorder ( ADHD) is a common neurodevelopmental disorder starting in childhood that may persist into adulthood. It can be managed through carefully monitored medication and nonpharmacological interventions. Access to care for children at risk of ADHD varies both within and between countries. A systematic literature review was conducted to investigate the research evidence related to factors which influence children accessing services for ADHD.

Studies investigating access to care for children at risk of ADHD were identified through electronic searches of the international peer‐reviewed and grey literature. Databases were searched from inception till 30th April 2012. This identified 23,156 articles which were subjected to three levels of screening (title, abstract and full text) by a minimum of two independent reviewers. Due to the heterogeneity in the study designs, a narrative approach was used to present the findings.

Twenty‐seven papers met the inclusion criteria; these were grouped into four main themes, with some papers being included in more than one. These were wider determinants (10 papers); identification of need (9 papers); entry and continuity of care (13 papers) and interventions to improve access (4 papers). Barriers and facilitators to access were found to operate at the individual, organisational and societal level. Limited evidence of effective interventions to improve access was identified.

This review explored the multilayered obstacles in the pathway to care for children at risk of ADHD and the lack of evidence‐based interventions designed to address these issues, thereby indicating areas for service development and further evaluative research.

The meaning of translational research and why it matters.

Edmund Sonuga‐Barke, Daniel Brandeis, Samuele Cortese … (2013)
Nonpharmacological treatments are available for attention deficit hyperactivity disorder (ADHD), although their efficacy remains uncertain. The authors undertook meta-analyses of the efficacy of dietary (restricted elimination diets, artificial food color exclusions, and free fatty acid supplementation) and psychological (cognitive training, neurofeedback, and behavioral interventions) ADHD treatments. Using a common systematic search and a rigorous coding and data extraction strategy across domains, the authors searched electronic databases to identify published randomized controlled trials that involved individuals who were diagnosed with ADHD (or who met a validated cutoff on a recognized rating scale) and that included an ADHD outcome. Fifty-four of the 2,904 nonduplicate screened records were included in the analyses. Two different analyses were performed. When the outcome measure was based on ADHD assessments by raters closest to the therapeutic setting, all dietary (standardized mean differences=0.21-0.48) and psychological (standardized mean differences=0.40-0.64) treatments produced statistically significant effects. However, when the best probably blinded assessment was employed, effects remained significant for free fatty acid supplementation (standardized mean difference=0.16) and artificial food color exclusion (standardized mean difference=0.42) but were substantially attenuated to nonsignificant levels for other treatments. Free fatty acid supplementation produced small but significant reductions in ADHD symptoms even with probably blinded assessments, although the clinical significance of these effects remains to be determined. Artificial food color exclusion produced larger effects but often in individuals selected for food sensitivities. Better evidence for efficacy from blinded assessments is required for behavioral interventions, neurofeedback, cognitive training, and restricted elimination diets before they can be supported as treatments for core ADHD symptoms.

Choosing a future for epidemiology: II. From black box to Chinese boxes and eco-epidemiology.

M Susser, E. Susser (1996)
Part I of this paper traced the evolution of modern epidemiology in terms of three eras, each with its dominant paradigm, culminating in the present era of chronic disease epidemiology with its paradigm, the black box. This paper sees the close of the present era and foresees a new era of eco-epidemiology in which the deployment of a different paradigm will be crucial. Here a paradigm is advocated for the emergent era. Encompassing many levels of organization--molecular and societal as well as individual--this paradigm, termed Chinese boxes, aims to integrate more than a single level in design, analysis, and interpretation. Such a paradigm could sustain and refine a public health-oriented epidemiology. But preventing a decline of creative epidemiology in this new era will require more than a cogent scientific paradigm. Attention will have to be paid to the social processes that foster a cohesive and humane discipline.