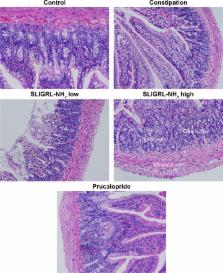 The feeding and excretion behaviors, intestinal transit ratio, and the histological feature of the colon in the constipated rats were all improved by SLIGRL-NH 2 treatment; moreover, SLIGRL-NH 2 treatment induced significant increase in the expression of PAR-2 and also increased number of interstitial Cajal cells. Furthermore, SLIGRL-NH 2 also decreased the contents of the inhibitory neurotransmitter VIP and increased the expression of the excitatory neurotransmitter SP. High dose of SLIGRL-NH 2 has shown similar anti-constipation effects as prucalopride.

These results suggested that SLIGRL-NH 2 can enhance gastrointestinal transit and alleviate in rats with loperamide-induced constipation.

Chronic constipation: a survey of the patient perspective.

J Kralstein,  K Johanson (2007)
Constipation is a common, often chronic, gastrointestinal motility disorder characterized by such symptoms as straining, hard stool, and infrequent defecation. Published literature is limited regarding symptom prevalence, healthcare-seeking behaviour, and patient satisfaction with traditional therapies for chronic constipation. To assess the prevalence of chronic constipation among a random sample of Americans, to identify the frequency, severity and bothersomeness of their symptoms, and to assess satisfaction levels with traditional treatments. All members (N = 37,004) of the Knowledge Networks Panel, representative of the US population, participated in a web-based survey. Eligibility was established using a six-question screener. Of the 24,090 panellists consenting to participate, 557 met eligibility requirements and took the 45-question survey. The most prevalent symptom was straining (79%). Hard stool and straining were the top two severe symptoms, and bloating, straining and hard stool were the top three bothersome symptoms. Symptoms affected quality of life of more than half (52%) the respondents. Among those who worked or went to school, 12% experienced reduced productivity and a mean of 2.4 days of absence in the month before the survey. Most respondents had used (96%) or were using (72%) constipation relief therapy; however, nearly half (47%) were not completely satisfied, mainly because of efficacy (82%) and safety (16%) concerns. Chronic constipation is common. Individual symptoms are often severe and bothersome, and many patients are dissatisfied with traditional treatment options, primarily because of lack of efficacy.

Systematic review on the management of chronic constipation in North America.