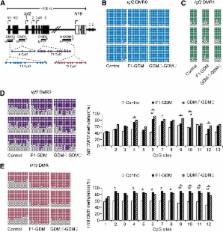 Gestational diabetes mellitus (GDM) has been shown to be associated with high risk of diabetes in offspring. However, the mechanisms involved and the possibilities of transgenerational transmission are still unclear. We intercrossed male and female adult control and first-generation offspring of GDM (F1-GDM) mice to obtain the second-generation (F2) offspring in four groups: C♂-C♀, C♂-GDM♀, GDM♂-C♀, and GDM♂-GDM♀. We found that birth weight significantly increased in F2 offspring through the paternal line with impaired glucose tolerance (IGT). Regardless of birth from F1-GDM with or without IGT, high risk of IGT appeared as early as 3 weeks in F2 offspring and progressed through both parental lineages, especial the paternal line. IGT in male offspring was more obvious than that in females, with parental characteristics and sex-specific transmission. In both F1 and F2 offspring of GDM, the expression of imprinted genes Igf2 and H19 was downregulated in pancreatic islets, caused by abnormal methylation status of the differentially methylated region, which may be one of the mechanisms for impaired islet ultrastructure and function. Furthermore, altered Igf2 and H19 gene expression was found in sperm of adult F1-GDM, regardless of the presence of IGT, indicating that changes of epigenetics in germ cells contributed to transgenerational transmission.

Ethan Dean,  Wolf Reik,  Matthew J. Walter (2001)
DNA methylation is a major epigenetic modification of the genome that regulates crucial aspects of its function. Genomic methylation patterns in somatic differentiated cells are generally stable and heritable. However, in mammals there are at least two developmental periods-in germ cells and in preimplantation embryos-in which methylation patterns are reprogrammed genome wide, generating cells with a broad developmental potential. Epigenetic reprogramming in germ cells is critical for imprinting; reprogramming in early embryos also affects imprinting. Reprogramming is likely to have a crucial role in establishing nuclear totipotency in normal development and in cloned animals, and in the erasure of acquired epigenetic information. A role of reprogramming in stem cell differentiation is also envisaged. DNA methylation is one of the best-studied epigenetic modifications of DNA in all unicellular and multicellular organisms. In mammals and other vertebrates, methylation occurs predominantly at the symmetrical dinucleotide CpG (1-4). Symmetrical methylation and the discovery of a DNA methyltransferase that prefers a hemimethylated substrate, Dnmt1 (4), suggested a mechanism by which specific patterns of methylation in the genome could be maintained. Patterns imposed on the genome at defined developmental time points in precursor cells could be maintained by Dnmt1, and would lead to predetermined programs of gene expression during development in descendants of the precursor cells (5, 6). This provided a means to explain how patterns of differentiation could be maintained by populations of cells. In addition, specific demethylation events in differentiated tissues could then lead to further changes in gene expression as needed. Neat and convincing as this model is, it is still largely unsubstantiated. While effects of methylation on expression of specific genes, particularly imprinted ones (7) and some retrotransposons (8), have been demonstrated in vivo, it is still unclear whether or not methylation is involved in the control of gene expression during normal development (9-13). Although enzymes have been identified that can methylate DNA de novo (Dnmt3a and Dnmt3b) (14), it is unknown how specific patterns of methylation are established in the genome. Mechanisms for active demethylation have been suggested, but no enzymes have been identified that carry out this function in vivo (15-17). Genomewide alterations in methylation-brought about, for example, by knockouts of the methylase genes-result in embryo lethality or developmental defects, but the basis for abnormal development still remains to be discovered (7, 14). What is clear, however, is that in mammals there are developmental periods of genomewide reprogramming of methylation patterns in vivo. Typically, a substantial part of the genome is demethylated, and after some time remethylated, in a cell- or tissue-specific pattern. The developmental dynamics of these reprogramming events, as well as some of the enzymatic mechanisms involved and the biological purposes, are beginning to be understood. Here we look at what is known about reprogramming in mammals and discuss how it might relate to developmental potency and imprinting.

Methylation of a CTCF-dependent boundary controls imprinted expression of the Igf2 gene.

Gary Felsenfeld,  Jeffrey A. Bell (2000)
The expression of the insulin-like growth factor 2 (Igf2) and H19 genes is imprinted. Although these neighbouring genes share an enhancer, H19 is expressed only from the maternal allele, and Igf2 only from the paternally inherited allele. A region of paternal-specific methylation upstream of H19 appears to be the site of an epigenetic mark that is required for the imprinting of these genes. A deletion within this region results in loss of imprinting of both H19 and Igf2 (ref. 5). Here we show that this methylated region contains an element that blocks enhancer activity. The activity of this element is dependent upon the vertebrate enhancer-blocking protein CTCF. Methylation of CpGs within the CTCF-binding sites eliminates binding of CTCF in vitro, and deletion of these sites results in loss of enhancer-blocking activity in vivo, thereby allowing gene expression. This CTCF-dependent enhancer-blocking element acts as an insulator. We suggest that it controls imprinting of Igf2. The activity of this insulator is restricted to the maternal allele by specific DNA methylation of the paternal allele. Our results reveal that DNA methylation can control gene expression by modulating enhancer access to the gene promoter through regulation of an enhancer boundary.

R Foley,  Marcus T Brock,  Peter D. Gluckman … (2004)
Many plants and animals are capable of developing in a variety of ways, forming characteristics that are well adapted to the environments in which they are likely to live. In adverse circumstances, for example, small size and slow metabolism can facilitate survival, whereas larger size and more rapid metabolism have advantages for reproductive success when resources are more abundant. Often these characteristics are induced in early life or are even set by cues to which their parents or grandparents were exposed. Individuals developmentally adapted to one environment may, however, be at risk when exposed to another when they are older. The biological evidence may be relevant to the understanding of human development and susceptibility to disease. As the nutritional state of many human mothers has improved around the world, the characteristics of their offspring--such as body size and metabolism--have also changed. Responsiveness to their mothers' condition before birth may generally prepare individuals so that they are best suited to the environment forecast by cues available in early life. Paradoxically, however, rapid improvements in nutrition and other environmental conditions may have damaging effects on the health of those people whose parents and grandparents lived in impoverished conditions. A fuller understanding of patterns of human plasticity in response to early nutrition and other environmental factors will have implications for the administration of public health.