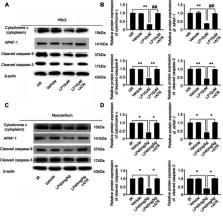 Mitochondria permeability transition pore (MPTP) is an important therapeutic target for myocardial ischemia-reperfusion injury (MIRI). Lycopene (LP) is a potent antioxidant extracted from the mature fruits of plants and has been reported to protect against MIRI; however, its mechanism of action has yet to be completely elucidated. The present study aimed to investigate the role of MPTP in the cardioprotection of LP.

H9c2 cells were pretreated with LP for 12 hrs and were subjected to 12-hr hypoxia/1-hr re-oxygenation, and cell viability was measured by a Cell Counting Kit-8 (CCK-8) assay. Male rats were subsequently intraperitoneally injected with LP for 5 consecutive days. At 24 hrs following the final injection, the rat hearts were isolated and subjected to 30-min ischemia/120-min reperfusion using Langendorff apparatus. The myocardial infarct size was measured by a TTC stain. Opening of the MPTP was induced by CaCl 2 and measured by colorimetry. The change in mitochondrial transmembrane potential (ΔΨm) was observed under a fluorescence microscope. Apoptosis was measured by flow cytometry and a TUNEL stain, and the expression of apoptosis-related proteins was detected by Western blotting.

LP pretreatment significantly increased cell viability, reduced myocardial infarct size and decreased the apoptosis rate. In addition, opening and the decrease of ΔΨm were attenuated by LP and the expressions of cytochrome c, APAF-1, cleaved caspase-9 and cleaved caspase-3 were also decreased by LP. However, these beneficial effects on MIRI were abrogated by the MPTP opener (atractyloside). Furthermore, LP treatment markedly increased Bcl-2 expression, decreased Bax expression and the Bax/Bcl-2 ratio.

The results of the present study demonstrated that LP protects against MIRI by inhibiting MPTP opening, partly through the modulation of Bax and Bcl-2.

Physiological and pathological roles of the mitochondrial permeability transition pore in the heart.

Jennifer Kwong,  Jeffery Molkentin (2015)
Prolonged mitochondrial permeability transition pore (MPTP) opening results in mitochondrial energetic dysfunction, organelle swelling, rupture, and typically a type of necrotic cell death. However, acute opening of the MPTP has a critical physiologic role in regulating mitochondrial Ca(2+) handling and metabolism. Despite the physiological and pathological roles that the MPTP orchestrates, the proteins that comprise the pore itself remain an area of ongoing investigation. Here, we will discuss the molecular composition of the MPTP and its role in regulating cardiac physiology and disease. A better understanding of MPTP structure and function will likely suggest novel cardioprotective therapeutic approaches.

Mariusz R. Wieckowski,  Paolo Pinton,  Carlotta Giorgi … (2017)
Acute myocardial infarction (MI) is a major cause of death and disability worldwide. The treatment of choice for reducing ischemic injury and limiting infarct size (IS) in patients with ST-segment elevation MI (STEMI) is timely and effective myocardial reperfusion via primary percutaneous coronary intervention (PCI). However, myocardial reperfusion itself may induce further cardiomyocyte death, a phenomenon known as reperfusion injury (RI). The opening of a large pore in the mitochondrial membrane, namely, the mitochondrial permeability transition pore (mPTP), is widely recognized as the final step of RI and is responsible for mitochondrial and cardiomyocyte death. Although myocardial reperfusion interventions continue to improve, there remain no effective therapies for preventing RI due to incomplete knowledge regarding RI components and mechanisms and to premature translations of findings from animals to humans. In the last year, increasing amounts of data describing mPTP components, structure, regulation and function have surfaced. These data may be crucial for gaining a better understanding of RI genesis and for planning future trials evaluating new cardioprotective strategies. In this chapter, we review the role of the mPTP in RI pathophysiology and report on recent studies investigating its structure and components. Finally, we provide a brief overview of principal cardioprotective strategies and their pitfalls.