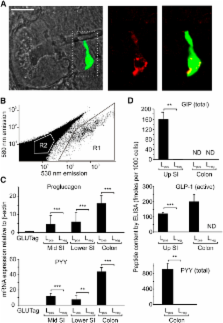 Glucagon-like peptide-1 (GLP-1) is an enteric hormone that stimulates insulin secretion and improves glycaemia in type 2 diabetes. Although GLP-1-based treatments are clinically available, alternative strategies to increase endogenous GLP-1 release from L cells are hampered by our limited physiological understanding of this cell type. By generating transgenic mice with L cell-specific expression of a fluorescent protein, we studied the characteristics of primary L cells by electrophysiology, fluorescence calcium imaging, and expression analysis and show that single L cells are electrically excitable and glucose responsive. Sensitivity to tolbutamide and low-millimolar concentrations of glucose and α-methylglucopyranoside, assessed in single L cells and by hormone secretion from primary cultures, suggested that GLP-1 release is regulated by the activity of sodium glucose cotransporter 1 and ATP-sensitive K + channels, consistent with their high expression levels in purified L cells by quantitative RT-PCR. These and other pathways identified using this approach will provide exciting opportunities for future physiological and therapeutic exploration.

A variant of yellow fluorescent protein with fast and efficient maturation for cell-biological applications.

Atsushi Miyawaki,  Takeharu Nagai,  J. Park … (2001)
The green fluorescent protein (GFP) from the jellyfish Aequorea victoria has provided a myriad of applications for biological systems. Over the last several years, mutagenesis studies have improved folding properties of GFP (refs 1,2). However, slow maturation is still a big obstacle to the use of GFP variants for visualization. These problems are exacerbated when GFP variants are expressed at 37 degrees C and/or targeted to certain organelles. Thus, obtaining GFP variants that mature more efficiently is crucial for the development of expanded research applications. Among Aequorea GFP variants, yellow fluorescent proteins (YFPs) are relatively acid-sensitive, and uniquely quenched by chloride ion (Cl-). For YFP to be fully and stably fluorescent, mutations that decrease the sensitivity to both pH and Cl- are desired. Here we describe the development of an improved version of YFP named "Venus". Venus contains a novel mutation, F46L, which at 37 degrees C greatly accelerates oxidation of the chromophore, the rate-limiting step of maturation. As a result of other mutations, F64L/M153T/V163A/S175G, Venus folds well and is relatively tolerant of exposure to acidosis and Cl-. We succeeded in efficiently targeting a neuropeptide Y-Venus fusion protein to the dense-core granules of PC12 cells. Its secretion was readily monitored by measuring release of fluorescence into the medium. The use of Venus as an acceptor allowed early detection of reliable signals of fluorescence resonance energy transfer (FRET) for Ca2+ measurements in brain slices. With the improved speed and efficiency of maturation and the increased resistance to environment, Venus will enable fluorescent labelings that were not possible before.

The physiology of glucagon-like peptide 1.

Jens Juul Holst (2007)
Glucagon-like peptide 1 (GLP-1) is a 30-amino acid peptide hormone produced in the intestinal epithelial endocrine L-cells by differential processing of proglucagon, the gene which is expressed in these cells. The current knowledge regarding regulation of proglucagon gene expression in the gut and in the brain and mechanisms responsible for the posttranslational processing are reviewed. GLP-1 is released in response to meal intake, and the stimuli and molecular mechanisms involved are discussed. GLP-1 is extremely rapidly metabolized and inactivated by the enzyme dipeptidyl peptidase IV even before the hormone has left the gut, raising the possibility that the actions of GLP-1 are transmitted via sensory neurons in the intestine and the liver expressing the GLP-1 receptor. Because of this, it is important to distinguish between measurements of the intact hormone (responsible for endocrine actions) or the sum of the intact hormone and its metabolites, reflecting the total L-cell secretion and therefore also the possible neural actions. The main actions of GLP-1 are to stimulate insulin secretion (i.e., to act as an incretin hormone) and to inhibit glucagon secretion, thereby contributing to limit postprandial glucose excursions. It also inhibits gastrointestinal motility and secretion and thus acts as an enterogastrone and part of the "ileal brake" mechanism. GLP-1 also appears to be a physiological regulator of appetite and food intake. Because of these actions, GLP-1 or GLP-1 receptor agonists are currently being evaluated for the therapy of type 2 diabetes. Decreased secretion of GLP-1 may contribute to the development of obesity, and exaggerated secretion may be responsible for postprandial reactive hypoglycemia.