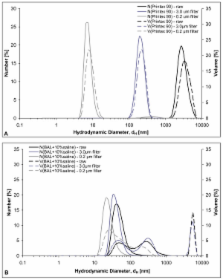 Widespread occupational exposure to carbon black nanoparticles (CBNPs) raises concerns over their safety. CBNPs are genotoxic in vitro but less is known about their genotoxicity in various organs in vivo.

Deposition of CBNPs in lung induces inflammatory and genotoxic effects in mouse lung that persist considerably after the initial exposure. Our results demonstrate that CBNPs may cause genotoxicity both in the primary exposed tissue, lung and BAL cells, and in a secondary tissue, the liver.

Peter Cheng,  H. Kasai,  S. Nishimura … (1992)
Mutations caused by oxidative DNA damage may contribute to human disease. A major product of that damage is 8-hydroxyguanine (oh8Gua). Because of differences in experimental design, the base pairing specificity of oh8G in vivo is not completely resolved. Here, oh8dGTP and DNA polymerase were used in two complementary bacteriophage plaque color assays to examine the mutagenic specificity of oh8Gua in vivo. The first is a reversion assay that detects all three single-base substitutions caused by misreading of guanine analogues inserted at a specific site. oh8Gua at that site gave a mutation frequency of 0.7%. Twenty-two of the 23 mutations were G----T substitutions. The second assay, a forward mutation assay, tests the mispairing potential of any altered nucleotide 1) during incorporation as substrate nucleotide, and 2) after multiple incorporations into a single-stranded DNA gap region of M13mp2. Substituting oh8dGTP for dGTP during polymerization produced 16% mutants; two classes of mutations were observed, both caused by pairing of oh8Gua with A. Seventy-six of 78 mutations were A----C substitutions, and two were G----T substitutions. These assays thus illustrate mutagenic replication of oh8Gua as template causing G----T substitutions and misincorporation of oh8Gua as substrate causing A----C substitutions, both caused by oh8Gua.A mispairs.

Alison Elder,  Robert Gelein,  Viorel Atudorei … (2002)
Studies with intravenously injected ultrafine particles have shown that the liver is the major organ of their uptake from the blood circulation. Measuring translocation of inhaled ultrafine particles to extrapulmonary organs via the blood compartment is hampered by methodological difficulties (i.e., label may come off, partial solubilization) and analytical limitations (measurement of very small amounts). The objective of our pilot study was to determine whether ultrafine elemental carbon particles translocate to the liver and other extrapulmonary organs following inhalation as singlet particles by rats. We generated ultrafine (13)C particles as an aerosol with count median diameters (CMDs) of 20-29 nm (GSD 1.7) using electric spark discharge of (13)C graphite electrodes in argon. Nine Fischer 344 rats were exposed to these particles for 6 h. in whole-body inhalation chambers at concentrations of 180 and 80 microg/m(3); 3 animals each were killed at 0.5, 18, and 24 h postexposure. Six unexposed rats served as controls. Lung lobes, liver, heart, brain, olfactory bulb, and kidney were excised, homogenized, and freeze-dried for analysis of the added (13)C by isotope ratio mass spectrometry. Organic (13)C was not detected in the (13)C particles. The (13)C retained in the lung at 0.5 h postexposure was about 70% less than predicted by rat deposition models for ultrafine particles, and did not change significantly during the 24-h postexposure period. Normalized to exposure concentration, the added (13)C per gram of lung on average in the postexposure period was approximately 9 ng/g organ/microg/m(3). Significant amounts of (13)C had accumulated in the liver by 0.5 h postinhalation only at the high exposure concentration, whereas by 18 and 24 h postexposure the (13)C amount of the livers of all exposed rats was about fivefold greater than the (13)C burden retained in the lung. No significant increase in (13)C was detected in the other organs which were examined. These results demonstrate effective translocation of ultrafine elemental carbon particles to the liver by 1 d after inhalation exposure. Translocation pathways include direct input into the blood compartment from ultrafine carbon particles deposited throughout the respiratory tract. However, since predictive particle deposition models indicate that respiratory tract deposits alone may not fully account for the hepatic (13)C burden, input from ultrafine particles present in the GI tract needs to be considered as well. Such translocation to blood and extrapulmonary tissues may well be different between ultrafine carbon and other insoluble (metal) ultrafine particles.

Rapid translocation of nanoparticles from the lung airspaces to the body.

Edmond Choi,  Akira Tsuda,  S. H. Kim … (2010)
Nano-size particles show promise for pulmonary drug delivery, yet their behavior after deposition in the lung remains poorly understood. In this study, a series of near-infrared (NIR) fluorescent nanoparticles were systematically varied in chemical composition, shape, size and surface charge, and their biodistribution and elimination were quantified in rat models after lung instillation. We demonstrate that nanoparticles with hydrodynamic diameter (HD) less than ≈34 nm and a noncationic surface charge translocate rapidly from the lung to mediastinal lymph nodes. Nanoparticles of HD < 6 nm can traffic rapidly from the lungs to lymph nodes and the bloodstream, and then be subsequently cleared by the kidneys. We discuss the importance of these findings for drug delivery, air pollution and carcinogenesis.