Divergent responses of the amygdala and ventral striatum predict stress-related problem drinking in young adults: Possible differential markers of affective and impulsive pathways of risk for alcohol use disorder 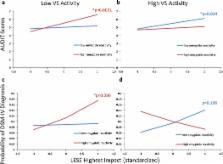 Prior work suggests there may be two distinct pathways of alcohol use disorder (AUD) risk: one associated with positive emotion enhancement and behavioral impulsivity, and one associated with negative emotion relief and coping. We sought to map these two pathways onto individual differences in neural reward and threat processing assessed using BOLD fMRI in a sample of 759 undergraduate students (426 women, mean age 19.65±1.24) participating in the Duke Neurogenetics Study. We demonstrate that problem drinking is highest in the context of stress and in those with one of two distinct neural phenotypes: 1) a combination of relatively low reward-related activity of the ventral striatum (VS) and high threat-related reactivity of the amygdala; or 2) a combination of relatively high VS activity and low amygdala reactivity. In addition, we demonstrate that the relationship between stress and problem alcohol use is mediated by impulsivity, as reflected in monetary delay discounting rates, for those with high VS-low amygdala reactivity, and by anxious/depressive symptomatology for those with the opposite neural risk phenotype. Across both neural phenotypes, we found that greater divergence between VS and amygdala reactivity predicted greater risk for problem drinking. Finally, for those individuals with the low VS-high amygdala risk phenotype we found that stress not only predicted the presence of a DSM-IV diagnosed AUD at the time of neuroimaging, but also subsequent problem drinking reported three months following study completion. These results offer new insight into the neural basis of AUD risk and suggest novel biological targets for early individualized treatment or prevention.

Development of the Alcohol Use Disorders Identification Test (AUDIT): WHO Collaborative Project on Early Detection of Persons with Harmful Alcohol Consumption-II

Development of the Alcohol Use Disorders Identification Test (AUDIT): WHO Collaborative Project on Early Detection of Persons with Harmful Alcohol Consumption--II.

Michael Saunders,  Alison D. Grant,  O G Aasland … (1993)
The Alcohol Use Disorders Identification Test (AUDIT) has been developed from a six-country WHO collaborative project as a screening instrument for hazardous and harmful alcohol consumption. It is a 10-item questionnaire which covers the domains of alcohol consumption, drinking behaviour, and alcohol-related problems. Questions were selected from a 150-item assessment schedule (which was administered to 1888 persons attending representative primary health care facilities) on the basis of their representativeness for these conceptual domains and their perceived usefulness for intervention. Responses to each question are scored from 0 to 4, giving a maximum possible score of 40. Among those diagnosed as having hazardous or harmful alcohol use, 92% had an AUDIT score of 8 or more, and 94% of those with non-hazardous consumption had a score of less than 8. AUDIT provides a simple method of early detection of hazardous and harmful alcohol use in primary health care settings and is the first instrument of its type to be derived on the basis of a cross-national study.

Amit Etkin,  Tor Wager (2007)
The study of human anxiety disorders has benefited greatly from functional neuroimaging approaches. Individual studies, however, vary greatly in their findings. The authors searched for common and disorder-specific functional neurobiological deficits in several anxiety disorders. The authors also compared these deficits to the neural systems engaged during anticipatory anxiety in healthy subjects. Functional magnetic resonance imaging and positron emission tomography studies of posttraumatic stress disorder (PTSD), social anxiety disorder, specific phobia, and fear conditioning in healthy individuals were compared by quantitative meta-analysis. Included studies compared negative emotional processing to baseline, neutral, or positive emotion conditions. Patients with any of the three disorders consistently showed greater activity than matched comparison subjects in the amygdala and insula, structures linked to negative emotional responses. A similar pattern was observed during fear conditioning in healthy subjects. Hyperactivation in the amygdala and insula were, of interest, more frequently observed in social anxiety disorder and specific phobia than in PTSD. By contrast, only patients with PTSD showed hypoactivation in the dorsal and rostral anterior cingulate cortices and the ventromedial prefrontal cortex-structures linked to the experience and regulation of emotion. This meta-analysis allowed us to synthesize often disparate findings from individual studies and thereby provide neuroimaging evidence for common brain mechanisms in anxiety disorders and normal fear. Effects unique to PTSD furthermore suggested a mechanism for the emotional dysregulation symptoms in PTSD that extend beyond an exaggerated fear response. Therefore, these findings help refine our understanding of anxiety disorders and their interrelationships.