Problematic Internet Use in early adolescence: The role of attachment and negative beliefs about worry 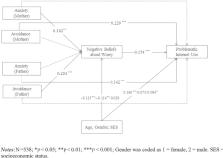 Five hundred and thirty-eight Italian early adolescents (51% females, M age = 12.7 years, SD = 0.87) were included in this study. The pattern of relationships specified by the theoretical model was examined through path analysis.

Overall, our findings show that attachment toward mother and father are differently linked to PIU and that negative beliefs about worry may play a mediating role in the association between attachment and PIU. Findings are discussed within clinical and preventive implications.

Reuben M. Baron, David A Kenny (1986)
In this article, we attempt to distinguish between the properties of moderator and mediator variables at a number of levels. First, we seek to make theorists and researchers aware of the importance of not using the terms moderator and mediator interchangeably by carefully elaborating, both conceptually and strategically, the many ways in which moderators and mediators differ. We then go beyond this largely pedagogical function and delineate the conceptual and strategic implications of making use of such distinctions with regard to a wide range of phenomena, including control and stress, attitudes, and personality traits. We also provide a specific compendium of analytic procedures appropriate for making the most effective use of the moderator and mediator distinction, both separately and in terms of a broader causal system that includes both moderators and mediators.

An overview of problematic internet use.

M Spada (2013)
Problematic Internet use (PIU), which has become a global social issue, can be broadly conceptualized as an inability to control one's use of the Internet which leads to negative consequences in daily life. The aim of this paper is to give a brief overview of the gradually evolving body of literature on PIU. This shows that the definitions and diagnostic criteria that have been proposed, and the assessment tools that have been developed, stress similarities between PIU, addictive behaviours and impulse-control disorders. Disagreements regarding diagnostic criteria and the lack of large epidemiological studies have resulted in difficulties in establishing the prevalence of PIU in the general population. Studies suggest high comorbidity rates between PIU and numerous psychiatric disorders highlighting the importance of focusing on comorbidity in treatment. There is growing evidence that genetic, personality and individual differences in automatic and controlled aspects of self-regulation may promote the development of PIU. Pharmacological and psychotherapeutic treatments specific to PIU have received limited testing in large, rigorous studies however preliminary evidence suggests that both psychotropic medications (Escitalopram, Naltrexone and Methylphenidate) and cognitive behaviour therapy may have some utility in the treatment of PIU. More research is needed on areas which remain unclear and contribute to the prognosis of PIU, in particular the temporal relationships between psychiatric disorder and PIU, mechanisms of comorbidity and the more subtle psychological changes that occur through Internet use. © 2013 Elsevier Ltd. All rights reserved.

TM and CM contributed equally to this work.