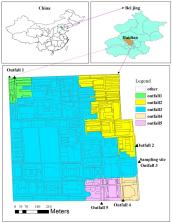 The microbial contamination of urban stormwater has an important impact on human health and stormwater reuse. This study develops an exploratory semi-distributed model, MOPUS_S, which can simulate faecal coliform levels in separate sewer systems in urban catchments. The MOPUS_S was built by coupling the SWMM model and the microbial MOPUS model. The parameters associated with the deposition and wash-off of microorganisms were more influential than those related to microorganism survival processes. Compared to other existing bacterial models, MOPUS_S showed comparable performance in predicting faecal coliform concentrations. The performance varied largely between rainfall events, with Nash-Sutcliffe efficiency (NSE) values ranging from −5.03 to 0.39 and R 2 ranging from −0.02 to 0.83, respectively. The model simulation results for low and medium concentrations were better than those for the peak concentrations. Poor simulation results of peak concentrations obviously affect the overall model performance. In general, MOPUS_S could be capable of predicting the faecal coliform load in urban catchments and be a useful tool for urban stormwater management planning.

Prevalence of human pathogens and indicators in stormwater runoff in Brisbane, Australia.

J.P.S. Sidhu,  L Hodgers,  W. Ahmed … (2012)
Elevated numbers of enteric pathogens in the receiving waters following a storm event can be a serious public health concern. The purpose of this study was to conduct a preliminary investigation into the presence of human pathogens of concern in urban stormwater runoff. The involvement of a human sewage as a potential source of contamination was also investigated by using microbial source tracking methods. Water samples (20 L) were collected after storm events and during the dry weather from six sites in Brisbane, Australia. Collected samples were analyzed for fecal indicator bacteria (FIB), and then concentrated using hollow fiber ultrafiltration followed by molecular detection of selected enteric pathogens. The levels of FIB were found to frequently exceed the upper limit of Australian guidelines for managing risks in recreational water, during the dry periods and by further several orders of magnitude in the stormwater runoff. Enterococcus spp. numbers as high as 3×10(4) 100 mL(-1) were detected in the stormwater runoff at the Fitzgibbon site. Human adenovirus and polyomavirus were frequently detected from all six sampling sites during wet and dry weather conditions suggesting their wide spread presence in the urban aquatic environments. Campylobacter jejuni, Campylobacter coli and Salmonella enterica were also detected during both dry and wet weather conditions. Presence of human-specific HF183 Bacteroides marker in most of the samples tested suggests ubiquitous sewage contamination in the urban environment. Since stormwater runoff routinely contains high numbers of FIB and other enteric pathogens, some degree of treatment of captured stormwater would be required if it were to be used for non-potable purposes. Crown Copyright © 2012. Published by Elsevier Ltd. All rights reserved.

R Thompson,  S. Wuertz,  Veronica B Rajal … (2007)
Many human pathogenic viruses are transmitted via the oral-fecal route and water is one possible vector, representing a risk for public health. Sixty-one large-volume water samples from storm drains in California were processed by a two-step hollow fiber ultrafiltration procedure followed by molecular analysis for human enterovirus and adenovirus types. Each sample was spiked with a surrogate, the benign bacteriophage PP7. Both surrogate and human viruses were quantified by newly designed TaqMan PCR assays. Equations were developed that account for the main variables in the procedure: recovery of the ultrafiltration, efficiency of nucleic acid extraction, and effect of inhibitors on the amplification of viral targets. Adenovirus 40/41 was detected in one sample at 230 genomes per liter, and no other adenovirus or enterovirus types were found. Samples that resulted in nondetects are reported together with the corresponding sample-specific limit of detection (S(LOD)), a useful tool when estimating the public health risk associated with the contact or ingestion of water. Virus concentrations did not correlate with traditional viable indicator concentrations or any of the physicochemical parameters measured. In contrast, coliform concentrations were correlated with total suspended solids. To our knowledge, this is the first study where all factors known to influence limits of detection have been investigated and integrated into equations that are widely applicable to the quantification of viruses or other microbial targets by PCR.