The mechanisms of sudden‐onset type adverse reactions to oseltamivir 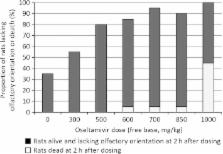 Oseltamivir is contraindicated for people aged 10–19 in principle in Japan, due to concern about abnormal behaviours. Sudden death is another concern. This review examines growing evidence of their association and discusses underlying mechanisms of these sudden‐onset type reactions to oseltamivir. First, the importance of animal models and the concept of human equivalent dose (HED) is summarized. Second, the specific condition for oseltamivir use, influenza infection, is reviewed. Third, findings from toxicity studies conducted prior to and after the marketing of oseltamivir are reported on to provide context on the observation of a possible causal association. Fourth, similarity and consistency of toxicity in humans with that in other animals is described. Finally, coherence of toxicokinetic and molecular level of evidence (channels, receptors and enzymes), including differences from the toxicity of other neuraminidase inhibitors, is reviewed. It is concluded that unchanged oseltamivir has various effects on the central nervous system (CNS) that may be related to clinical findings including hypothermia, abnormal behaviours including with fatal outcome, and sudden death. Among receptors and enzymes related to CNS action, it is known that oseltamivir inhibits nicotinic acetylcholine receptors, which are closely related to hypothermia, as well as human monoamine oxidase‐A (MAO‐A), which is closely related to abnormal or excitatory behaviours. Receptors such as GABA A, GABA B and NMDA and their related receptors/channels including Na + and Ca 2+ channels are thought to be other candidates for investigation related to respiratory suppression followed by sudden death and psychotic reactions (both acute and chronic), respectively.

Oseltamivir treatment for influenza in adults: a meta-analysis of randomised controlled trials.

Joanna Dobson,  Richard J. Whitley,  Stuart Pocock … (2015)
Despite widespread use, questions remain about the efficacy of oseltamivir in the treatment of influenza. We aimed to do an individual patient data meta-analysis for all clinical trials comparing oseltamivir with placebo for treatment of seasonal influenza in adults regarding symptom alleviation, complications, and safety.

Guidelines for the design and statistical analysis of experiments using laboratory animals.

Doug G. Altman,  Michael Festing (2001)
For ethical and economic reasons, it is important to design animal experiments well, to analyze the data correctly, and to use the minimum number of animals necessary to achieve the scientific objectives---but not so few as to miss biologically important effects or require unnecessary repetition of experiments. Investigators are urged to consult a statistician at the design stage and are reminded that no experiment should ever be started without a clear idea of how the resulting data are to be analyzed. These guidelines are provided to help biomedical research workers perform their experiments efficiently and analyze their results so that they can extract all useful information from the resulting data. Among the topics discussed are the varying purposes of experiments (e.g., exploratory vs. confirmatory); the experimental unit; the necessity of recording full experimental details (e.g., species, sex, age, microbiological status, strain and source of animals, and husbandry conditions); assigning experimental units to treatments using randomization; other aspects of the experiment (e.g., timing of measurements); using formal experimental designs (e.g., completely randomized and randomized block); estimating the size of the experiment using power and sample size calculations; screening raw data for obvious errors; using the t-test or analysis of variance for parametric analysis; and effective design of graphical data.

Use of the oral neuraminidase inhibitor oseltamivir in experimental human influenza: randomized controlled trials for prevention and treatment.

C. Ward,  Daniel S Straus,  John J Treanor … (1999)
Influenza virus neuraminidase is thought to be essential for virus replication in humans; however, to date, available neuraminidase inhibitors are limited to zanamivir, which is topically administered. To determine the safety, tolerability, and antiviral activity of oral neuraminidase inhibitor oseltamivir (GS4104/Ro64-0796) for prevention and the early treatment of influenza in experimentally infected humans. Two randomized, double-blind, placebo-controlled trials conducted between June and July 1997. Individual hotel rooms; 2 large US university medical schools. A total of 117 healthy adult volunteers (aged 18-40 years; median age, 21 years) who were susceptible (hemagglutination-inhibition antibody titer < or =1:8). All subjects were inoculated intranasally with influenza A/Texas/36/91 (H1N1) virus. For the prophylaxis study, oral oseltamivir (100 mg once daily [n = 12], 100 mg twice daily [n = 12], or matching placebo [n = 13], starting 26 hours before virus inoculation) was administered. For the treatment study, the same drug was given (20 mg, 100 mg, or 200 mg twice daily, 200 mg once daily, or matching placebo [n = 16], in each group starting 28 hours after inoculation). All regimens were continued for 5 days. Comparing placebo groups with pooled treatment groups, for prophylaxis, outcomes included frequency of infection and viral shedding; for treatment, viral shedding in titers. In the prophylaxis study, 8 (67%) of 12 placebo and 8 (38%) of 21 oseltamivir recipients became infected (P = .16; efficacy, 61%); 6 (50%) placebo compared with 0 oseltamivir recipients shed virus (P<.001; efficacy, 100%), and 33% of placebo but no oseltamivir recipient had infection-related respiratory illness (P<.01). Among infected subjects in the treatment study (n = 69), the viral titer area under the curve of the combined oseltamivir groups (n = 56) was lower (median [interquartile range [IQR]], 80 [23-151] vs 273 [79-306] log10 tissue culture-infective doses50 per milliliter x hour; P = .02) than the placebo group (n = 13), and the median (IQR) duration of viral shedding with therapy was reduced from 107 (83-131) to 58 (35-59) hours (P = .003). Oseltamivir treatment also reduced symptom scores (median [IQR] score-hours, 225 [97-349] vs 400 [189-645]; P = .05), and nasal proinflammatory cytokine levels. Transient mild to moderate nausea after dosing was observed in 15 (17%) of 88 oseltamivir and 2 (7%) of 29 placebo recipients (95% confidence interval for difference, -11% to 68%), which was largely prevented by ingestion with food. In these trials, prophylaxis and early treatment with oral oseltamivir were both associated with significant antiviral and clinical effects in experimental human influenza.