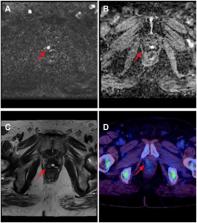 Defining biochemical recurrence of prostate cancer after radical prostatectomy: a proposal for a standardized definition.

Peter T. Scardino,  Randell Stephenson,  Michael W. Kattan … (2006)
Prostate-specific antigen (PSA) defined biochemical recurrence (BCR) of prostate cancer is widely used for reporting the outcome of radical prostatectomy (RP). A standardized BCR definition is lacking, and overall progression-free probability and risk of subsequent metastatic disease progression may vary greatly depending on the PSA criterion used. Ten definitions of BCR were evaluated to identify the one that best explains metastatic progression. Of 3,125 patients who underwent RP at our institution since 1985, 75 developed distant metastasis during a median follow-up of 49 months. To predict metastasis progression, we modeled the clinical information using multivariable Cox regression analysis. BCR was included in the model as a time-dependent covariate, and separate models were developed for each definition. A goodness-of-fit (R2) statistic was used to determine the Cox model (and thereby the BCR definition) that best explained metastatic progression. The 10-year progression-free probability ranged from 63% to 79%, depending on the BCR definition. The model containing BCR defined as a PSA of at least 0.4 ng/mL followed by another increase best explained metastatic progression (R2 = 0.21). This definition was also associated with a high probability of subsequent secondary therapy, continued PSA progression, and rapid PSA doubling time. BCR defined as a PSA value of at least 0.4 ng/mL followed by another increase best explains the development of distant metastasis among 10 candidate definitions, after controlling for clinical variables and the use of secondary therapy. On the basis of this evidence, we propose that this definition be adopted as the standard for reporting the outcome of RP.

This article was submitted to Cancer Imaging and Image-directed Interventions, a section of the journal Frontiers in Oncology