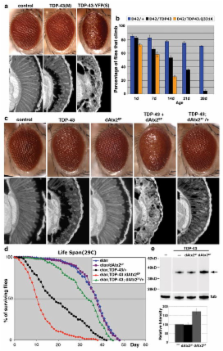 Amyotrophic lateral sclerosis (ALS) is a devastating human neurodegenerative disease. The causes of ALS are poorly understood, although the protein TDP-43 has been suggested to play a critical role in disease pathogenesis. Here we show that Ataxin-2, a polyglutamine (polyQ) protein mutated in spinocerebellar ataxia type 2 (SCA2), is a potent modifier of TDP-43 toxicity in animal and cellular models. The proteins associate in a complex that depends on RNA. Ataxin-2 is abnormally localized in spinal cord neurons of ALS patients. Likewise, TDP-43 shows mislocalization in SCA2. To assess a role in ALS, we analyzed the Ataxin-2 gene ( ATXN2) in 915 ALS patients. We found intermediate-length polyQ expansions (27–33 Qs) in ATXN2 significantly associated with ALS. These data establish ATXN2 as a relatively common ALS disease susceptibility gene. Further, these findings indicate that the TDP-43/Ataxin-2 interaction may be a promising target for therapeutic intervention in ALS and other TDP-43 proteinopathies.

Brian J. Lee,  Adam Truax,  Waldan Kwong … (2006)
Ubiquitin-positive, tau- and alpha-synuclein-negative inclusions are hallmarks of frontotemporal lobar degeneration with ubiquitin-positive inclusions and amyotrophic lateral sclerosis. Although the identity of the ubiquitinated protein specific to either disorder was unknown, we showed that TDP-43 is the major disease protein in both disorders. Pathologic TDP-43 was hyper-phosphorylated, ubiquitinated, and cleaved to generate C-terminal fragments and was recovered only from affected central nervous system regions, including hippocampus, neocortex, and spinal cord. TDP-43 represents the common pathologic substrate linking these neurodegenerative disorders.

Susan Lindquist,  Aaron Gitler,  Songsong Cao … (2006)
Alpha-synuclein (alphaSyn) misfolding is associated with several devastating neurodegenerative disorders, including Parkinson's disease (PD). In yeast cells and in neurons alphaSyn accumulation is cytotoxic, but little is known about its normal function or pathobiology. The earliest defect following alphaSyn expression in yeast was a block in endoplasmic reticulum (ER)-to-Golgi vesicular trafficking. In a genomewide screen, the largest class of toxicity modifiers were proteins functioning at this same step, including the Rab guanosine triphosphatase Ypt1p, which associated with cytoplasmic alphaSyn inclusions. Elevated expression of Rab1, the mammalian YPT1 homolog, protected against alphaSyn-induced dopaminergic neuron loss in animal models of PD. Thus, synucleinopathies may result from disruptions in basic cellular functions that interface with the unique biology of particular neurons to make them especially vulnerable.

Huda Zoghbi,  Mark Orr (2006)
The discovery that expansion of unstable repeats can cause a variety of neurological disorders has changed the landscape of disease-oriented research for several forms of mental retardation, Huntington disease, inherited ataxias, and muscular dystrophy. The dynamic nature of these mutations provided an explanation for the variable phenotype expressivity within a family. Beyond diagnosis and genetic counseling, the benefits from studying these disorders have been noted in both neurobiology and cell biology. Examples include insight about the role of translational control in synaptic plasticity, the role of RNA processing in the integrity of muscle and neuronal function, the importance of Fe-S-containing enzymes for cellular energy, and the dramatic effects of altering protein conformations on neuronal function and survival. It is exciting that within a span of 15 years, pathogenesis studies of this class of disorders are beginning to reveal pathways that are potential therapeutic targets.