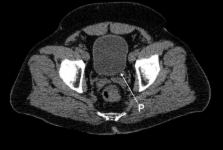 Anders Arner,  Karl Andersson (2004)
The detrusor smooth muscle is the main muscle component of the urinary bladder wall. Its ability to contract over a large length interval and to relax determines the bladder function during filling and micturition. These processes are regulated by several external nervous and hormonal control systems, and the detrusor contains multiple receptors and signaling pathways. Functional changes of the detrusor can be found in several clinically important conditions, e.g., lower urinary tract symptoms (LUTS) and bladder outlet obstruction. The aim of this review is to summarize and synthesize basic information and recent advances in the understanding of the properties of the detrusor smooth muscle, its contractile system, cellular signaling, membrane properties, and cellular receptors. Alterations in these systems in pathological conditions of the bladder wall are described, and some areas for future research are suggested.

Margaret Pearle,  Elizabeth Calhoun,  Gary Curhan (2005)
We quantified the burden of urolithiasis in the United States by identifying trends in the use of health care resources and estimating the economic impact of the disease. The analytical methods used to generate these results have been described previously. The rate of national inpatient hospitalizations for a diagnosis of urolithiasis decreased by 15% and hospital length of stay decreased from 2.6 to 2.2 days between 1994 and 2000. Rates of hospitalization were 2.5 to 3-fold higher for Medicare beneficiaries with little change between 1992 and 1998. Almost 2 million outpatient visits for a primary diagnosis of urolithiasis were recorded in 2000. Hospital outpatient visits increased by 40% between 1994 and 2000 and physician office visits increased by 43% between 1992 and 2000. In the Medicare population hospital outpatient and office visits increased by 29% and 41%, respectively, between 1992 and 1998. The distribution of surgical procedures remained relatively stable through the 1990s. Shock wave lithotripsy was the most commonly performed procedure, followed closely by ureteroscopy. Overall the total estimated annual expenditure for individuals with claims for a diagnosis of urolithiasis was almost $2.1 billion in 2000, representing a 50% increase since 1994. The cost of urolithiasis is estimated at almost $2 billion annually and it appears to be increasing with time despite a shift in inpatient to outpatient treatment and the emergence of minimally invasive treatment modalities, perhaps because the prevalence of stone disease is increasing.

Edward Monico,  Kimberly Brink,  Andrew Haims … (2004)
To determine the awareness level concerning radiation dose and possible risks associated with computed tomographic (CT) scans among patients, emergency department (ED) physicians, and radiologists. Adult patients seen in the ED of a U.S. academic medical center during a 2-week period with mild to moderate abdominopelvic or flank pain and who underwent CT were surveyed after acquisition of the CT scan. Patients were asked whether or not they were informed about the risks, benefits, and radiation dose of the CT scan and if they believed that the scan increased their lifetime cancer risk. Patients were also asked to estimate the radiation dose for the CT scan compared with that for one chest radiograph. ED physicians who requested CT scans and radiologists who reviewed the CT scans were surveyed with similar questions and an additional question regarding the number of years in practice. The chi(2) test of independence was used to compare the three respondent groups regarding perceived increased cancer risk from one abdominopelvic CT scan. Seven percent (five of 76) of patients reported that they were told about risks and benefits of their CT scan, while 22% (10 of 45) of ED physicians reported that they had provided such information. Forty-seven percent (18 of 38) of radiologists believed that there was increased cancer risk, whereas only 9% (four of 45) of ED physicians and 3% (two of 76) of patients believed that there was increased risk (chi(2)(2) = 41.45, P <.001). All patients and most ED physicians and radiologists were unable to accurately estimate the dose for one CT scan compared with that for one chest radiograph. Patients are not given information about the risks, benefits, and radiation dose for a CT scan. Patients, ED physicians, and radiologists alike are unable to provide accurate estimates of CT doses regardless of their experience level.

This is an Open Access article distributed under the terms of the Creative Commons Non-Commercial Attribution License, which permits its use in any digital medium, provided the original work is properly cited and not altered. For details, please refer to http://creativecommons.org/licenses/by-nc-nd/3.0/. Authors grant Western Journal of Emergency Medicine a nonexclusive license to publish the manuscript.