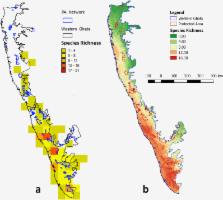 Rattans, or canes, are one of the most important non-timber forest products supporting the livelihood of many forest-dwelling communities in South and North-eastern India. Due to increased demand for rattan products, rattans have been extracted indiscriminately from the Western Ghats, a 1600-km mountain chain running parallel to the west coast of India. Extensive harvesting, loss of habitat and poor regeneration has resulted in dwindling rattan populations, necessitating an urgent attempt to conserve existing rattan resources. In this study, using niche-modelling tools, an attempt has been made to identify areas of high species richness of rattans in the Western Ghats, one of the mega-diversity regions of the world. We have also developed conservation values for 21 economically important and endemic rattans of the Western Ghats. We identified at least two to three sites of extremely high species richness outside the existing protected area network that should be prioritized for in situ conservation. This study emphasizes the need to develop strategies for the long-term conservation of rattans in the Western Ghats, India.

Carolina da Silva,  C Mittermeier,  A C R G Fonseca … (2000)
Conservationists are far from able to assist all species under threat, if only for lack of funding. This places a premium on priorities: how can we support the most species at the least cost? One way is to identify 'biodiversity hotspots' where exceptional concentrations of endemic species are undergoing exceptional loss of habitat. As many as 44% of all species of vascular plants and 35% of all species in four vertebrate groups are confined to 25 hotspots comprising only 1.4% of the land surface of the Earth. This opens the way for a 'silver bullet' strategy on the part of conservation planners, focusing on these hotspots in proportion to their share of the world's species at risk.

C R Margules,  Robert Pressey (2000)
The realization of conservation goals requires strategies for managing whole landscapes including areas allocated to both production and protection. Reserves alone are not adequate for nature conservation but they are the cornerstone on which regional strategies are built. Reserves have two main roles. They should sample or represent the biodiversity of each region and they should separate this biodiversity from processes that threaten its persistence. Existing reserve systems throughout the world contain a biased sample of biodiversity, usually that of remote places and other areas that are unsuitable for commercial activities. A more systematic approach to locating and designing reserves has been evolving and this approach will need to be implemented if a large proportion of today's biodiversity is to exist in a future of increasing numbers of people and their demands on natural resources.

Daniel Pauly,  Arco Van Strien,  Thomasina E E Oldfield … (2010)
In 2002, world leaders committed, through the Convention on Biological Diversity, to achieve a significant reduction in the rate of biodiversity loss by 2010. We compiled 31 indicators to report on progress toward this target. Most indicators of the state of biodiversity (covering species' population trends, extinction risk, habitat extent and condition, and community composition) showed declines, with no significant recent reductions in rate, whereas indicators of pressures on biodiversity (including resource consumption, invasive alien species, nitrogen pollution, overexploitation, and climate change impacts) showed increases. Despite some local successes and increasing responses (including extent and biodiversity coverage of protected areas, sustainable forest management, policy responses to invasive alien species, and biodiversity-related aid), the rate of biodiversity loss does not appear to be slowing.