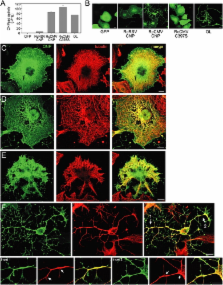 Oligodendrocytes (OLs) extend arborized processes that are supported by microtubules (MTs) and microfilaments. Little is known about proteins that modulate and interact with the cytoskeleton during myelination. Several lines of evidence suggest a role for 2′,3′-cyclic nucleotide 3′-phosphodiesterase (CNP) in mediating process formation in OLs. In this study, we report that tubulin is a major CNP-interacting protein. In vitro, CNP binds preferentially to tubulin heterodimers compared with MTs and induces MT assembly by copolymerizing with tubulin. CNP overexpression induces dramatic morphology changes in both glial and nonglial cells, resulting in MT and F-actin reorganization and formation of branched processes. These morphological effects are attributed to CNP MT assembly activity; branched process formation is either substantially reduced or abolished with the expression of loss-of-function mutants. Accordingly, cultured OLs from CNP-deficient mice extend smaller outgrowths with less arborized processes. We propose that CNP is an important component of the cytoskeletal machinery that directs process outgrowth in OLs.

Corinna Lappe-Siefke,  Donald P. Braun,  Klaus-Armin Nave … (2003)
Myelination of axons by oligodendrocytes enables rapid impulse propagation in the central nervous system. But long-term interactions between axons and their myelin sheaths are poorly understood. Here we show that Cnp1, which encodes 2',3'-cyclic nucleotide phosphodiesterase in oligodendrocytes, is essential for axonal survival but not for myelin assembly. In the absence of glial cyclic nucleotide phosphodiesterase, mice developed axonal swellings and neurodegeneration throughout the brain, leading to hydrocephalus and premature death. But, in contrast to previously studied myelin mutants, the ultrastructure, periodicity and physical stability of myelin were not altered in these mice. Genetically, the chief function of glia in supporting axonal integrity can thus be completely uncoupled from its function in maintaining compact myelin. Oligodendrocyte dysfunction, such as that in multiple sclerosis lesions, may suffice to cause secondary axonal loss.

Liqun Luo (2001)
The actin cytoskeleton plays a major role in morphological development of neurons and in structural changes of adult neurons. This article reviews the myriad functions of actin and myosin in axon initiation, growth, guidance and branching, in morphogenesis of dendrites and dendritic spines, in synapse formation and stability, and in axon and dendrite retraction. Evidence is presented that signaling pathways involving the Rho family of small GTPases are key regulators of actin polymerization and myosin function in the context of different aspects of neuronal morphogenesis. These studies support an emerging theme: Different aspects of neuronal morphogenesis may involve regulation of common core signaling pathways, in particular the Rho GTPases.