The HUNT study: participation is associated with survival and depends on socioeconomic status, diseases and symptoms 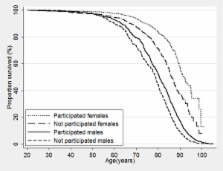 Population based studies are important for prevalence, incidence and association studies, but their external validity might be threatened by decreasing participation rates. The 50 807 participants in the third survey of the HUNT Study (HUNT3, 2006-08), represented 54% of the invited, necessitating a nonparticipation study.

Questionnaire data from HUNT3 were compared with data collected from several sources: a short questionnaire to nonparticipants, anonymous data on specific diagnoses and prescribed medication extracted from randomly selected general practices, registry data from Statistics Norway on socioeconomic factors and mortality, and from the Norwegian Prescription Database on drug consumption.

Participation rates for HUNT3 depended on age, sex and type of symptoms and diseases, but only small changes were found in the overall prevalence estimates when including data from 6922 nonparticipants. Among nonparticipants, the prevalences of cardiovascular diseases, diabetes mellitus and psychiatric disorders were higher both in nonparticipant data and data extracted from general practice, compared to that reported by participants, whilst the opposite pattern was found, at least among persons younger than 80 years, for urine incontinence, musculoskeletal pain and headache. Registry data showed that the nonparticipants had lower socioeconomic status and a higher mortality than participants.

Nonparticipants had lower socioeconomic status, higher mortality and showed higher prevalences of several chronic diseases, whilst opposite patterns were found for common problems like musculoskeletal pain, urine incontinence and headache. The impact on associations should be analyzed for each diagnosis, and data making such analyses possible are provided in the present paper.

Barriers to participation in randomised controlled trials: a systematic review.

Kathleen Grant,  C Counsell,  David Prescott … (1999)
A systematic review of three bibliographic databases from 1986 to 1996 identified 78 papers reporting barriers to recruitment of clinicians and patients to randomised controlled trials. Clinician barriers included: time constraints, lack of staff and training, worry about the impact on the doctor-patient relationship, concern for patients, loss of professional autonomy, difficulty with the consent procedure, lack of rewards and recognition, and an insufficiently interesting question. Patient barriers included: additional demands of the trial, patient preferences, worry caused by uncertainty, and concerns about information and consent. To overcome barriers to clinician recruitment, the trial should address an important research question and the protocol and data collection should be as straightforward as possible. The demands on clinicians and patients should be kept to a minimum. Dedicated research staff may be required to support clinical staff and patients. The recruitment aspects of a randomised controlled trial should be carefully planned and piloted. Further work is needed to quantify the extent of problems associated with clinician and patient participation, and proper evaluation is required of strategies to overcome barriers.

Survey non-response in the Netherlands: effects on prevalence estimates and associations.

A. van Loon (2003)
Differences in respondent characteristics may lead to bias in prevalence estimates and bias in associations. Both forms of non-response bias are investigated in a study on psychosocial factors and cancer risk, which is a sub-study of a large-scale monitoring survey in the Netherlands. Respondents of a cross-sectional monitoring project (MORGEN; N = 22,769) were also asked to participate in a prospective study on psychosocial factors and cancer risk (HLEQ; N = 12,097). To investigate diverse aspects of non-response in the HLEQ on prevalence estimates and associations are studied, based on information gathered in the MORGEN-project. A response percentage of 45% was obtained in the MORGEN-project. Response rates were found to be lower among men and younger people. The HLEQ showed a response percentage of 56%, and respondents reported higher socioeconomic status, better subjective health and healthier lifestyle behaviors than non-respondents. However, associations between smoking status and either socioeconomic status or subjective health based on respondents only were not statistically different from those based on the entire MORGEN-population. Non-response leads to bias in prevalence estimates of current smoking, current alcohol intake, and low physical activity or poor subjective health. However, non-response did not cause bias in the examined associations.

Non-response and related factors in a nation-wide health survey.

P Rautava,  M. Koskenvuo,  J Ahvenainen … (2000)
To analyse selective factors associated with an unexpectedly low response rate. The baseline questionnaire survey of a large prospective follow-up study on the psychosocial health of the Finnish working-aged randomly chosen population resulted in 21,101 responses (40.0%) in 1998. The non-respondent analysis used demographic and health-related population characteristics from the official statistics and behavioural, physical and mental health-related outcome differences between early and late respondents to predict possible non-response bias. Reasons for non-response, indicated by missing responses of late respondents, and factors affecting the giving of consent were also analysed. The probability of not responding was greater for men, older age groups, those with less education, divorced and widowed respondents, and respondents on disability pension. The physical health-related differences between the respondents and the general population were small and could be explained by differences in definitions. The late respondents smoked and used more psychopharmaceutical drugs than the early ones, suggesting similar features in non-respondents. The sensitive issues had a small effect on the response rate. The consent to use a medical register-based follow-up was obtained from 94.5% of the early and 90.9% of the late respondents (odds ratio: 1.70; 95% confidence interval: 1.49-1.93). Consent was more likely among respondents reporting current smoking, heavy alcohol use, panic disorder or use of tranquillisers. The main reasons for non-response may be the predisposing sociodemographic and behavioural factors, the length and sensitive nature of the questionnaire to some extent, and a suspicion of written consent and a connection being made between the individual and the registers mentioned on the consent form.