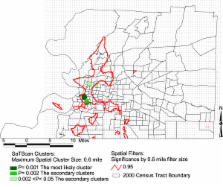 The purpose of this study is to examine the spatial and population (e.g., socio-economic) characteristics of low birthweight using two different cluster estimation techniques. We compared the results of Kulldorff's Spatial Scan Statistic with the results of Rushton's Spatial filtering technique across increasing sizes of spatial filters (circle). We were able to demonstrate that varying approaches exist to explore spatial variation in patterns of low birth weight.

Spatial filtering results did not show any particular area that was not statistically significant based on SaTScan. The high rates, which remain as the filter size increases to 0.4, 0.5 to 0.6 miles, respectively, indicate that these differences are less likely due to chance. The maternal characteristics of births within clusters differed considerably between the two methods. Progressively larger Spatial filters removed local spatial variability, which eventually produced an approximate uniform pattern of low birth weight.

SaTScan and Spatial filtering cluster estimation methods produced noticeably different results from the same individual level birth data. SaTScan clusters are likely to differ from Spatial filtering clusters in terms of population characteristics and geographic area within clusters. Using the two methods in conjunction could provide more detail about the population and spatial features contained with each type of cluster.

John Krieger,  Jessica Waterman,  Veedamali Subramanian … (2003)
: To determine which area based socioeconomic measures can meaningfully be used, at which level of geography, to monitor socioeconomic inequalities in childhood health in the US. Cross sectional analysis of birth certificate and childhood lead poisoning registry data, geocoded and linked to diverse area based socioeconomic measures that were generated at three geographical levels: census tract, block group, and ZIP code. Two US states: Massachusetts (1990 population=6,016,425) and Rhode Island (1990 population=1,003,464). All births born to mothers ages 15 to 55 years old who were residents of either Massachusetts (1989-1991; n=267,311) or Rhode Island (1987-1993; n=96 138), and all children ages 1 to 5 years residing in Rhode Island who were screened for lead levels between 1994 and 1996 (n=62,514 children, restricted to first test during the study period). Analyses of both the birth weight and lead data indicated that: (a) block group and tract socioeconomic measures performed similarly within and across both states, while ZIP code level measures tended to detect smaller effects; (b) measures pertaining to economic poverty detected stronger gradients than measures of education, occupation, and wealth; (c) results were similar for categories generated by quintiles and by a priori categorical cut off points; and (d) the area based socioeconomic measures yielded estimates of effect equal to or augmenting those detected, respectively, by individual level educational data for birth outcomes and by the area based housing measure recommended by the US government for monitoring childhood lead poisoning. Census tract or block group area based socioeconomic measures of economic deprivation could be meaningfully used in conjunction with US public health surveillance systems to enable or enhance monitoring of social inequalities in health in the United States.