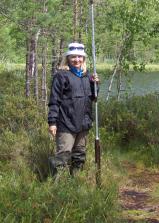 TUL Herbarium presents collections from Tula Oblast stored at the Tula State Lev Tolstoy Pedagogical University, Russia, which is an educational and scientific institution that supports various types of scientific activities, including research on biodiversity and nature conservation. The university is a holder of some biological collections, such as herbarium of vascular plants, mosses and fungi collected mainly throughout Tula Oblast and from adjacent regions.

The collections of vascular plants (9,000 specimens) were imaged in December 2019 and January 2020. Databasing and georeferencing of the specimens from the TUL Herbarium was performed by the staff members of the Tula State Lev Tolstoy Pedagogical University and Tula Local History Museum. Digital collections of the TUL Herbarium are fully available in the Moscow Digital Herbarium ( https://plant.depo.msu.ru/) and GBIF ( https://doi.org/10.15468/ca08cm).

The Largest Digital Herbarium in Russia is Now Available Online!

MOSCOW DIGITAL HERBARIUM: A CONSORTIUM SINCE 2019

Alexey Seregin (2021)
Moscow University Herbarium (MW) is the second largest herbarium in Russia after the Komarov Institute. Being available at https://plant.depo.msu.ru/, it is almost completely imaged either at 300 dpi for regular collections or at 600 dpi for type specimens. The herbarium is focused on the flora of temperate Eurasia with an emphasis on the flora of Russia. As of 1 November 2018, physical collections of MW Herbarium include 1,044,571 specimens (incl. 4.8K type specimens) representing 37,200 species and subspecies of vascular plants and 2,223 species and subspecies of bryophytes. Currently, MW holds the 63rd place in the world's ranking (Thiers, 2019). Moscow University Herbarium preserve some important historical collections by G.F. Hoffmann, J.F. Ehrhart, C.B. Trinius, J.R. and J.G.A. Forsters, and their correspondents. The Moscow University Herbarium added a millionth specimen to the collections in June 2016. An average annual growth of the collections is ca. 15,000 specimens, with an exceptional 22,013 specimens added to the herbarium in 2016. In 2017, we added 19,416 new accessions. Since 2005, major accessions originated from Eastern Europe, Siberia and Russian Far East, the Caucasus, and South Asia (vascular plants); Taimyr, Russian Far East, and North Caucasus (bryophytes). The Moscow University Herbarium has gained budget for the digitisation of the collections within the Program of the National Depository Bank of Live Systems (Moscow Digital Herbarium Initiative), and ca. 970,000 specimens were scanned since May 2015. All records are published at https://plant.depo.msu.ru/, including JPG images and metadata required for indexing. The number of georeferenced specimens with fully captured labels is constantly growing. Brief metadata (collector's name and collection date) were added for 83% specimens in July 2018 to enable easy grouping of specimens prior to label capturing and georeferencing. As of September 2019, labels of 325,635 specimens are fully captured and 425,618 specimens are precisely georeferenced. 4,939 occurrences from Yakutia were georeferenced in March 2019 by the support of RFBR project 'Sravnitel'nyj analiz zakonomernostej raznoobraziya drevesnyh i travyanistyh vidov kontinental'noj Azii' (# 19-54-53014). 5,140 occurrences from Mongolia were georeferenced in December 2020 by the support of RFBR project 'Sravnitel'nyj analiz zakonomernostej raznoobraziya drevesnyh i travyanistyh vidov kontinental'noj Azii' (# 19-54-53014). 68,166 occurrences were georeferenced from March, 1 2019 to September, 24 2019 by the support of FinBIF project 'Supporting the regular georeferencing of European Russia holdings in the Moscow Digital Herbarium' (Russia2019_14, see details at https://www.gbif.org/project/2dfnq4VJQxHVSoPZWykiCb/supporting-the-regular-georeferencing-of-european-russia-holdings-in-the-moscow-digital-herbarium). They include newly georeferenced records from Eastern European plain, western slope of the Urals and Northern Caucasus. Moscow Digital Herbarium (MW and MHA herbaria online) is the largest Russian biodiversity database. It is fully available in GBIF. It is the primary source for the "Distribution Atlas of the Russian Flora" to be outworked in the Moscow University in due time. Moscow Digital Herbarium holds several regional portals like "Flora of Moscow" (https://moscow.depo.msu.ru/) for further stimulation of the digitisation efforts across Russian herbaria.

The imaging was supported by the research project 19-44-710002 (Diversity assessment and visualization of the Tula Oblast flora using modern data technologies) funded by RFBR and Tula Oblast Government.