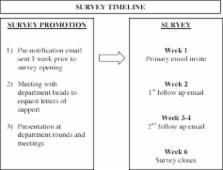 As part of a larger project to look at physician payment plans, an online survey about medical billing practices was distributed to 904 physicians from various medical specialties. The primary method for physicians to complete the survey was via the Internet using a well-known and established survey company ( www.surveymonkey.com). Multiple methods were used to encourage survey response such as individual personalized email invitations, multiple reminders, and a draw for three gift certificate prizes were used to increase response rate. Descriptive statistics were used to assess response rates and reasons for non-response.

Our survey results provide a look into the challenges of collecting healthcare research where response rates to surveys are often low. The findings presented here should help researchers in planning future survey based studies. Findings from this study and others suggest smaller monetary incentives for each individual may be a more appropriate way to increase response rates.

Development of a Standard E-Mail Methodology: Results of an Experiment

T Konrad, S. Cummings, Lucy Savitz (2001)
To examine response rate information from mailed physician questionnaires reported in published articles. Citations for articles published between 1985 and 1995 were obtained using a key word search of the Medline, PsychLit, and Sociofile databases. A 5 percent random sample of relevant citations was selected from each year. Citations found to be other than physician surveys were discarded and replaced with the next randomly assigned article. Selected articles were abstracted using a standardized variable list. The average response rate for mailed physician questionnaires was 61 percent. The average response rate for large sample surveys (> 1,000 observations) was 52 percent. In addition, only 44 percent of the abstracted articles reported a discussion of response bias, and only 54 percent reported any type of follow-up. (1) Response rates have remained somewhat constant over time, and (2) researchers need to document the efforts used to increase response rates to mailed physician questionnaires.