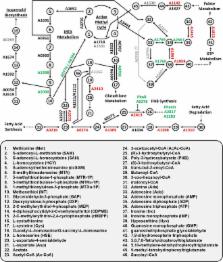 Rhodospirillum rubrum possesses a novel oxygen-independent, aerobic methionine salvage pathway (MSP) for recycling methionine from 5-methylthioadenosine (MTA), the MTA-isoprenoid shunt. This organism can also metabolize MTA as a sulfur source under anaerobic conditions, suggesting that the MTA-isoprenoid shunt may also function anaerobically as well. In this study, deep proteomics profiling, directed metabolite analysis, and reverse transcriptase quantitative PCR (RT-qPCR) revealed metabolic changes in response to anaerobic growth on MTA versus sulfate as sole sulfur source. The abundance of protein levels associated with methionine transport, cell motility, and chemotaxis increased in the presence of MTA over that in the presence of sulfate. Purine salvage from MTA resulted primarily in hypoxanthine accumulation and a decrease in protein levels involved in GMP-to-AMP conversion to balance purine pools. Acyl coenzyme A (acyl-CoA) metabolic protein levels for lipid metabolism were lower in abundance, whereas poly-β-hydroxybutyrate synthesis and storage were increased nearly 10-fold. The known R. rubrum aerobic MSP was also shown to be upregulated, to function anaerobically, and to recycle MTA. This suggested that other organisms with gene homologues for the MTA-isoprenoid shunt may also possess a functioning anaerobic MSP. In support of our previous findings that ribulose-1,5-carboxylase/oxygenase (RubisCO) is required for an apparently purely anaerobic MSP, RubisCO transcript and protein levels both increased in abundance by over 10-fold in cells grown anaerobically on MTA over those in cells grown on sulfate, resulting in increased intracellular RubisCO activity. These results reveal for the first time global metabolic responses as a consequence of anaerobic MTA metabolism compared to using sulfate as the sulfur source.

In nearly all organisms, sulfur-containing byproducts result from many metabolic reactions. Unless these compounds are further metabolized, valuable organic sulfur is lost and can become limiting. To regenerate the sulfur-containing amino acid methionine, organisms typically employ one of several variations of a “universal” methionine salvage pathway (MSP). A common aspect of the universal MSP is a final oxygenation step. This work establishes that the metabolically versatile bacterium Rhodospirillum rubrum employs a novel MSP that does not require oxygen under either aerobic or anaerobic conditions. There is also a separate, dedicated anaerobic MTA metabolic route in R. rubrum. This work reveals global changes in cellular metabolism in response to anaerobic MTA metabolism compared to using sulfate as a sulfur source. We found that cell mobility and transport were enhanced, along with lipid, nucleotide, and carbohydrate metabolism, when cells were grown in the presence of MTA.

DTASelect and Contrast: tools for assembling and comparing protein identifications from shotgun proteomics.

David L. Tabb,  W. McDonald,  John Yates (2015)
The components of complex peptide mixtures can be separated by liquid chromatography, fragmented by tandem mass spectrometry, and identified by the SEQUEST algorithm. Inferring a mixture's source proteins requires that the identified peptides be reassociated. This process becomes more challenging as the number of peptides increases. DTASelect, a new software package, assembles SEQUEST identifications and highlights the most significant matches. The accompanying Contrast tool compares DTASelect results from multiple experiments. The two programs improve the speed and precision of proteomic data analysis.

Markus Wirtz,  Barbara A Moffatt,  Rüdiger Hell … (2013)
Both Met (methionine) and SAM (S-adenosylmethionine), the activated form of Met, participate in a number of essential metabolic pathways in plants. The subcellular compartmentalization of Met fluxes will be discussed in the present review with respect to regulation and communication with the sulfur assimilation pathway, the network of the aspartate-derived amino acids and the demand for production of SAM. SAM enters the ethylene, nicotianamine and polyamine biosynthetic pathways and provides the methyl group for the majority of methylation reactions required for plant growth and development. The multiple essential roles of SAM require regulation of its synthesis, recycling and distribution to sustain these different pathways. A particular focus of the present review will be on the function of recently identified genes of the Met salvage cycle or Yang cycle and the importance of the Met salvage cycle in the metabolism of MTA (5'-methylthioadenosine). MTA has the potential for product inhibition of ethylene, nicotianamine and polyamine biosynthesis which provides an additional link between these pathways. Interestingly, regulation of Met cycle genes was found to differ between plant species as shown for Arabidopsis thaliana and Oryza sativa.

Function, structure, and evolution of the RubisCO-like proteins and their RubisCO homologs.

Jaya Singh,  Mary E Hanson,  Huiying Li … (2007)
About 30 years have now passed since it was discovered that microbes synthesize RubisCO molecules that differ from the typical plant paradigm. RubisCOs of forms I, II, and III catalyze CO(2) fixation reactions, albeit for potentially different physiological purposes, while the RubisCO-like protein (RLP) (form IV RubisCO) has evolved, thus far at least, to catalyze reactions that are important for sulfur metabolism. RubisCO is the major global CO(2) fixation catalyst, and RLP is a somewhat related protein, exemplified by the fact that some of the latter proteins, along with RubisCO, catalyze similar enolization reactions as a part of their respective catalytic mechanisms. RLP in some organisms catalyzes a key reaction of a methionine salvage pathway, while in green sulfur bacteria, RLP plays a role in oxidative thiosulfate metabolism. In many organisms, the function of RLP is unknown. Indeed, there now appear to be at least six different clades of RLP molecules found in nature. Consideration of the many RubisCO (forms I, II, and III) and RLP (form IV) sequences in the database has subsequently led to a coherent picture of how these proteins may have evolved, with a form III RubisCO arising from the Methanomicrobia as the most likely ultimate source of all RubisCO and RLP lineages. In addition, structure-function analyses of RLP and RubisCO have provided information as to how the active sites of these proteins have evolved for their specific functions.

This article is a direct contribution from a Fellow of the American Academy of Microbiology. External solicited reviewers: Donald Bryant, The Pennsylvania State University; Alfred Spormann, Stanford University.