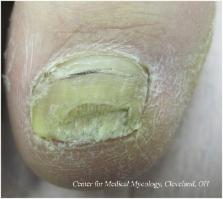 A large-scale North American study of fungal isolates from nails: the frequency of onychomycosis, fungal distribution, and antifungal susceptibility patterns.

P Krusinski,  M Zaiac,  João R. Daniel … (2000)
Onychomycosis, a fungal infection of the nail bed, is responsible for up to 50% of nail disorders. Although several surveys have been conducted in different parts of the world, there have been no multicenter epidemiologic surveys of onychomycosis in North America. A 12-center study was undertaken to (1) determine the frequency of onychomycosis, (2) identify organisms recovered from the nails, and (3) determine the antifungal susceptibility of isolates. A total of 1832 subjects participated in this study and completed a comprehensive questionnaire, and nail clippings were collected for potassium hydroxide examination and culturing. The frequency of onychomycosis, as defined by the presence of septate hyphae on direct microscopy and/or the recovery of a dermatophyte, was found to be 13.8%. In general, the dermatophyte isolates were susceptible to the antifungals tested. Because of the limited number of large-scale studies, the baseline incidence is not firmly established. However, the higher frequency of onychomycosis in this study may confirm the suspected increase in incidence of disease in North America.

Prevalence and epidemiology of onychomycosis in patients visiting physicians' offices: a multicenter canadian survey of 15,000 patients.

Ecology and epidemiology of dermatophyte infections.

Raza Aly (1994)
Our knowledge of ecology and epidemiology of dermatophytes and the factors influencing their transmission has helped us understand better the natural history of dermatophytoses. It seems that the anthropophilic agents of scalp infection are being eradicated in developing nations. The exception is Trichophyton tonsurans-related tinea capitis in North America. Microsporum canis is a prevalent agent of tinea capitis in many regions of the world, and this could be related to close association of humans with their pets. Trichophyton violaceum is endemic in certain parts of Eastern Europe, Africa, Asia, and South America but not in North America. Trichophyton rubrum is the most common cause worldwide of tinea pedis, nail infection, tinea cruris, and tinea corporis. Although the incidence of tinea capitis is declining in developed nations, tinea pedis and onychomycosis are becoming more common. The increased use of athletic shoes both by men and women and communal bathing could be contributing factors. Five or six species account for most dermatophytoses globally.

The authors have received no specific funding for this work.