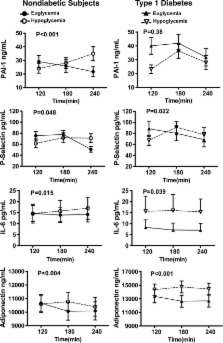 Recent large randomized trials have linked adverse cardiovascular and cerebrovascular events with hypoglycemia. However, the integrated physiological and vascular biological mechanisms occurring during hypoglycemia have not been extensively examined. Therefore, the aim of this study was to determine whether 2 h of moderate clamped hypoglycemia could decrease fibrinolytic balance and activate pro-atherothrombotic mechanisms in individuals with type 1 diabetes and healthy individuals.

Insulin levels were similar (602 ± 44 pmol/l) in all four protocols. Glycemia was equivalent in both euglycemic protocols (5.2 ± 0.1 mmol/l), and the level of hypoglycemia was also equivalent in both type 1 diabetic subjects and healthy control subjects (2.9 ± 0.1 mmol/l). Using repeated ANOVA, it was determined that plasminogen activator inhibitor (PAI-1), vascular cell adhesion molecule (VCAM), intercellular adhesion molecule (ICAM), E-selectin, P-selectin, interleukin-6 (IL-6), vascular endothelial growth factor (VEGF), and adiponectin responses were all significantly increased ( P < 0.05) during the 2 h of hyperinsulinemic hypoglycemia as compared with euglycemia in healthy control subjects. All measures except PAI-1 were also found to be increased during hypoglycemia compared with euglycemia in type 1 diabetes.

Frequency of severe hypoglycemia in patients with type I diabetes with impaired awareness of hypoglycemia.

D Ewing,  C Martyn,  R. Young … (2015)
Five simple, noninvasive cardiovascular reflex tests have been used to assess autonomic function in one center over the past 10 yr. Seven hundred seventy-four diabetic subjects were tested for diagnostic and research purposes. In 543 subjects completing all five tests, abnormalities of heart rate tests occurred in 40%, while abnormal blood pressure tests occurred in less than 20%. Their results were grouped as normal (39%), early (15%), definite (18%), and severe (22%) involvement. Six percent had an atypical pattern of results. Two hundred thirty-seven diabetic subjects had the tests repeated greater than or equal to 3 mo apart: 26% worsened, 71% were unchanged, and only 3% improved. The worsening followed a sequential pattern with first heart rate and later additional blood pressure abnormalities. Comparison between a single test (heart rate response to deep breathing) and the full battery in 360 subjects showed that one test alone does not distinguish the degree or severity of autonomic damage. These tests provide a useful framework to assess autonomic neuropathy simply, quickly, and noninvasively.

Michael D. Dake,  David Waugh,  A Brendolan … (2001)
Vascular endothelial growth factor (VEGF) can promote angiogenesis but may also exert certain effects to alter the rate of atherosclerotic plaque development. To evaluate this potential impact on plaque progression, we treated cholesterol-fed mice doubly deficient in apolipoprotein E/apolipoprotein B100 with low doses of VEGF (2 microg/kg) or albumin. VEGF significantly increased macrophage levels in bone marrow and peripheral blood and increased plaque area 5-, 14- and 4-fold compared with controls at weeks 1, 2 and 3, respectively. Plaque macrophage and endothelial cell content also increased disproportionately over controls. In order to confirm that the VEGF-mediated plaque progression was not species-specific, the experiment was repeated in cholesterol-fed rabbits at the three-week timepoint, which showed comparable increases in plaque progression.