Openness to Experience as a Moderator of the Relationship between Intelligence and Creative Thinking: A Study of Chinese Children in Urban and Rural Areas 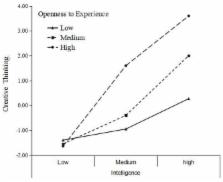 Reuben M. Baron, David A Kenny (1986)
In this article, we attempt to distinguish between the properties of moderator and mediator variables at a number of levels. First, we seek to make theorists and researchers aware of the importance of not using the terms moderator and mediator interchangeably by carefully elaborating, both conceptually and strategically, the many ways in which moderators and mediators differ. We then go beyond this largely pedagogical function and delineate the conceptual and strategic implications of making use of such distinctions with regard to a wide range of phenomena, including control and stress, attitudes, and personality traits. We also provide a specific compendium of analytic procedures appropriate for making the most effective use of the moderator and mediator distinction, both separately and in terms of a broader causal system that includes both moderators and mediators.

A meta-analysis of personality in scientific and artistic creativity.

G J Feist (1998)
Theory and research in both personality psychology and creativity share an essential commonality: emphasis on the uniqueness of the individual. Both disciplines also share an emphasis on temporal consistency and have a 50-year history, and yet no quantitative review of the literature on the creative personality has been conducted. The 3 major goals of this article are to present the results of the first meta-analytic review of the literature on personality and creative achievement, to present a conceptual integration of underlying potential psychological mechanisms that personality and creativity have in common, and to show how the topic of creativity has been important to personality psychologists and can be to social psychologists. A common system of personality description was obtained by classifying trait terms or scales onto one of the Five-Factor Model (or Big Five) dimensions: neuroticism, extraversion, openness, agreeableness, and conscientiousness. Effect size was measured using Cohen's d (Cohen, 1988). Comparisons on personality traits were made on 3 sets of samples: scientists versus nonscientists, more creative versus less creative scientists, and artists versus nonartists. In general, creative people are more open to new experiences, less conventional and less conscientious, more self-confident, self-accepting, driven, ambitious, dominant, hostile, and impulsive. Out of these, the largest effect sizes were on openness, conscientiousness, self-acceptance, hostility, and impulsivity. Further, there appears to be temporal stability of these distinguishing personality dimensions of creative people. Dispositions important to creative behavior are parsed into social, cognitive, motivational, and affective dimensions. Creativity like most complex behaviors requires an intra- as well as interdisciplinary view and thereby mitigates the historically disciplinocentric attitudes of personality and social psychologists.

This article was submitted to Personality and Social Psychology, a section of the journal Frontiers in Psychology