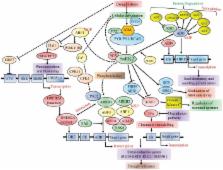 Increasing vulnerability of plants to a variety of stresses such as drought, salt and extreme temperatures poses a global threat to sustained growth and productivity of major crops. Of these stresses, drought represents a considerable threat to plant growth and development. In view of this, developing staple food cultivars with improved drought tolerance emerges as the most sustainable solution toward improving crop productivity in a scenario of climate change. In parallel, unraveling the genetic architecture and the targeted identification of molecular networks using modern “OMICS” analyses, that can underpin drought tolerance mechanisms, is urgently required. Importantly, integrated studies intending to elucidate complex mechanisms can bridge the gap existing in our current knowledge about drought stress tolerance in plants. It is now well established that drought tolerance is regulated by several genes, including transcription factors (TFs) that enable plants to withstand unfavorable conditions, and these remain potential genomic candidates for their wide application in crop breeding. These TFs represent the key molecular switches orchestrating the regulation of plant developmental processes in response to a variety of stresses. The current review aims to offer a deeper understanding of TFs engaged in regulating plant’s response under drought stress and to devise potential strategies to improve plant tolerance against drought.

Kazuko Yamaguchi-Shinozaki,  Mie Kasuga,  Y Sakuma … (2003)
The transcription factors DREBs/CBFs specifically interact with the dehydration-responsive element/C-repeat (DRE/CRT) cis-acting element (core motif: G/ACCGAC) and control the expression of many stress-inducible genes in Arabidopsis. In rice, we isolated five cDNAs for DREB homologs: OsDREB1A, OsDREB1B, OsDREB1C, OsDREB1D, and OsDREB2A. Expression of OsDREB1A and OsDREB1B was induced by cold, whereas expression of OsDREB2A was induced by dehydration and high-salt stresses. The OsDREB1A and OsDREB2A proteins specifically bound to DRE and activated the transcription of the GUS reporter gene driven by DRE in rice protoplasts. Over-expression of OsDREB1A in transgenic Arabidopsis induced over-expression of target stress-inducible genes of Arabidopsis DREB1A resulting in plants with higher tolerance to drought, high-salt, and freezing stresses. This indicated that OsDREB1A has functional similarity to DREB1A. However, in microarray and RNA blot analyses, some stress-inducible target genes of the DREB1A proteins that have only ACCGAC as DRE were not over-expressed in the OsDREB1A transgenic Arabidopsis. The OsDREB1A protein bound to GCCGAC more preferentially than to ACCGAC whereas the DREB1A proteins bound to both GCCGAC and ACCGAC efficiently. The structures of DREB1-type ERF/AP2 domains in monocots are closely related to each other as compared with that in the dicots. OsDREB1A is potentially useful for producing transgenic monocots that are tolerant to drought, high-salt, and/or cold stresses.

PlantTFDB 3.0: a portal for the functional and evolutionary study of plant transcription factors

Jinpu Jin,  Yi-He Zhang,  Lei Kong … (2013)
With the aim to provide a resource for functional and evolutionary study of plant transcription factors (TFs), we updated the plant TF database PlantTFDB to version 3.0 (http://planttfdb.cbi.pku.edu.cn). After refining the TF classification pipeline, we systematically identified 129 288 TFs from 83 species, of which 67 species have genome sequences, covering main lineages of green plants. Besides the abundant annotation provided in the previous version, we generated more annotations for identified TFs, including expression, regulation, interaction, conserved elements, phenotype information, expert-curated descriptions derived from UniProt, TAIR and NCBI GeneRIF, as well as references to provide clues for functional studies of TFs. To help identify evolutionary relationship among identified TFs, we assigned 69 450 TFs into 3924 orthologous groups, and constructed 9217 phylogenetic trees for TFs within the same families or same orthologous groups, respectively. In addition, we set up a TF prediction server in this version for users to identify TFs from their own sequences.

Swati Puranik,  Pranav Sahu,  Prem Srivastava … (2012)
The plant-specific NAC (NAM, ATAF1,2 and CUC2) proteins constitute a major transcription factor family renowned for their roles in several developmental programs. Despite their highly conserved DNA-binding domains, their remarkable diversification across plants reflects their numerous functions. Lately, they have received much attention as regulators in various stress signaling pathways which may include interplay of phytohormones. This review summarizes the recent progress in research on NACs highlighting the proteins' potential for engineering stress tolerance against various abiotic and biotic challenges. We discuss regulatory components and targets of NAC proteins in the context of their prospective role for crop improvement strategies via biotechnological intervention. Copyright © 2012 Elsevier Ltd. All rights reserved.