Epidemiological profiles of recurrent malaria episodes in an endemic area along the Thailand-Myanmar border: a prospective cohort study 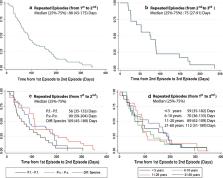 In low malaria transmission areas, many people acquire multiple malaria infections within a single season. This study aimed to describe the pattern and epidemiological profile of malaria recurrence in a hypoendemic area of western Thailand and identify factors associated with having multiple malaria episodes.

An open cohort of 7000 residents in seven clusters along the Thai-Myanmar border was followed during a 6.5-year period (2011–mid 2017). Symptomatic and asymptomatic malaria infections were detected by passive case detection (PCD), weekly household visit, and mass blood surveys every 4–6 months. Malaria recurrence was defined as subsequent parasitaemic episodes occurred later than 7 days after receiving anti-malarial treatment. This study focused on analysis of recurrent episodes that occurred within 1 year after treatment. Numbers of malaria cases with single and multiple episodes were compared between clusters. Kaplan–Meier curve was performed to determine the intervals of recurrent episodes by Plasmodium species and age groups. The ordinal logistic model was used to determine factors associated with multiple malaria episodes, and to compare with single episodes, and those with no malaria infection.

The cumulative incidence of malaria in the study area was 5.2% over the 6.5 years. Overall, 410 malaria patients were detected. Of these patients, 20% and 16% had multiple malaria episodes during the entire period and within 1 year after initial treatment, respectively. About 80% of repeated malaria episodes were caused by the same Plasmodium species as the primary infections. The median interval and interquartile range (IQR) between the first and second episode was 88 (43–175) days for all parasites, 56 (35–133) days for two Plasmodium falciparum episodes, and 90 (59–204) days for two Plasmodium vivax episodes. The interval between the episodes was increased with age. Factors significantly associated with multiple episodes of malaria infection included male sex, young age, Karen ethnicity, forest-related occupation, and having other malaria infected persons in the same house in the same period.

People who have multiple malaria episodes may play an important role in maintaining malaria transmission in the area. Understanding epidemiological profiles of this group is important for planning strategies to achieve the elimination goal.

Nicholas J. White (2011)
Plasmodium vivax is a major cause of febrile illness in endemic areas of Asia, Central and South America, and the horn of Africa. Plasmodium vivax infections are characterized by relapses of malaria arising from persistent liver stages of the parasite (hypnozoites) which can be prevented only by 8-aminoquinoline anti-malarials. Tropical P. vivax relapses at three week intervals if rapidly eliminated anti-malarials are given for treatment, whereas in temperate regions and parts of the sub-tropics P. vivax infections are characterized either by a long incubation or a long-latency period between illness and relapse - in both cases approximating 8-10 months. The epidemiology of the different relapse phenotypes has not been defined adequately despite obvious relevance to malaria control and elimination. The number of sporozoites inoculated by the anopheline mosquito is an important determinant of both the timing and the number of relapses. The intervals between relapses display a remarkable periodicity which has not been explained. Evidence is presented that the proportion of patients who have successive relapses is relatively constant and that the factor which activates hypnozoites and leads to regular interval relapse in vivax malaria is the systemic febrile illness itself. It is proposed that in endemic areas a large proportion of the population harbours latent hypnozoites which can be activated by a systemic illness such as vivax or falciparum malaria. This explains the high rates of vivax following falciparum malaria, the high proportion of heterologous genotypes in relapses, the higher rates of relapse in people living in endemic areas compared with artificial infection studies, and, by facilitating recombination between different genotypes, contributes to P. vivax genetic diversity particularly in low transmission settings. Long-latency P. vivax phenotypes may be more widespread and more prevalent than currently thought. These observations have important implications for the assessment of radical treatment efficacy and for malaria control and elimination.

Eleanor M. Riley,  Sia Msuya,  Teun Bousema … (2010)
Variation in the risk of malaria within populations is a frequently described but poorly understood phenomenon. This heterogeneity creates opportunities for targeted interventions but only if hot spots of malaria transmission can be easily identified. We determined spatial patterns in malaria transmission in a district in northeastern Tanzania, using malaria incidence data from a cohort study involving infants and household-level mosquito sampling data. The parasite prevalence rates and age-specific seroconversion rates (SCRs) of antibodies against Plasmodium falciparum antigens were determined in samples obtained from people attending health care facilities. Five clusters of higher malaria incidence were detected and interpreted as hot spots of transmission. These hot spots partially overlapped with clusters of higher mosquito exposure but could not be satisfactorily predicted by a probability model based on environmental factors. Small-scale local variation in malaria exposure was detected by parasite prevalence rates and SCR estimates for samples of health care facility attendees. SCR estimates were strongly associated with local malaria incidence rates and predicted hot spots of malaria transmission with 95% sensitivity and 85% specificity. Serological markers were able to detect spatial variation in malaria transmission at the microepidemiological level, and they have the potential to form an effective method for spatial targeting of malaria control efforts.

Sasithon Pukrittayakamee,  Nicholas Day,  Shalini Nair … (2007)
Relapses originating from hypnozoites are characteristic of Plasmodium vivax infections. Thus, reappearance of parasitemia after treatment can result from relapse, recrudescence, or reinfection. It has been assumed that parasites causing relapse would be a subset of the parasites that caused the primary infection. Paired samples were collected before initiation of antimalarial treatment and at recurrence of parasitemia from 149 patients with vivax malaria in Thailand (n=36), where reinfection could be excluded, and during field studies in Myanmar (n=75) and India (n=38). Combined genetic data from 2 genotyping approaches showed that novel P. vivax populations were present in the majority of patients with recurrent infection (107 [72%] of 149 patients overall [78% of patients in Thailand, 75% of patients in Myanmar {Burma}, and 63% of patients in India]). In 61% of the Thai and Burmese patients and in 55% of the Indian patients, the recurrent infections contained none of the parasite genotypes that caused the acute infection. The P. vivax populations emerging from hypnozoites commonly differ from the populations that caused the acute episode. Activation of heterologous hypnozoite populations is the most common cause of first relapse in patients with vivax malaria.