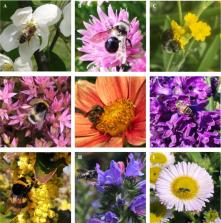 The increase in managed honeybees ( Apis mellifera) in many European cities has unknown effects on the densities of wild bees through competition. To investigate this, we monitored honeybees and non-honeybees from 01 April to 31 July 2019 and 2020 at 29 species of plants representing diverse taxonomic and floral-functional types in a large urban garden in the city of Munich in which the same plant species were cultivated in both years. No bee hives were present in the focal garden, and all bee hives in the adjacent area were closely monitored by interviewing the relevant bee keepers in both 2019 and 2020. Honeybee numbers were similar in April of both years, but increased from May to July 2020 compared to 2019. The higher densities correlated with a significant increase in shifts from wild bee to honeybee visits in May/June/July, while visitor spectra in April 2019 and 2020 remained the same. Most of the species that experienced a shift to honeybee visits in 2020 were visited mostly or exclusively for their nectar. There were no shifts towards increased wild bee visits in any species. These results from a flower-rich garden have implications for the discussion of whether urban bee keeping might negatively impact wild bees. We found clear support that high honeybee densities result in exploitative competition at numerous types of flowers.

Do managed bees have negative effects on wild bees?: A systematic review of the literature

Rachel Mallinger,  Hannah R. Gaines-Day,  Claudio Gratton (2017)
Managed bees are critical for crop pollination worldwide. As the demand for pollinator-dependent crops increases, so does the use of managed bees. Concern has arisen that managed bees may have unintended negative impacts on native wild bees, which are important pollinators in both agricultural and natural ecosystems. The goal of this study was to synthesize the literature documenting the effects of managed honey bees and bumble bees on wild bees in three areas: (1) competition for floral and nesting resources, (2) indirect effects via changes in plant communities, including the spread of exotic plants and decline of native plants, and (3) transmission of pathogens. The majority of reviewed studies reported negative effects of managed bees, but trends differed across topical areas. Of studies examining competition, results were highly variable with 53% reporting negative effects on wild bees, while 28% reported no effects and 19% reported mixed effects (varying with the bee species or variables examined). Equal numbers of studies examining plant communities reported positive (36%) and negative (36%) effects, with the remainder reporting no or mixed effects. Finally, the majority of studies on pathogen transmission (70%) reported potential negative effects of managed bees on wild bees. However, most studies across all topical areas documented the potential for impact (e.g. reporting the occurrence of competition or pathogens), but did not measure direct effects on wild bee fitness, abundance, or diversity. Furthermore, we found that results varied depending on whether managed bees were in their native or non-native range; managed bees within their native range had lesser competitive effects, but potentially greater effects on wild bees via pathogen transmission. We conclude that while this field has expanded considerably in recent decades, additional research measuring direct, long-term, and population-level effects of managed bees is needed to understand their potential impact on wild bees.