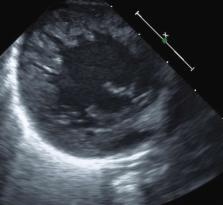 Background Left ventricular noncompaction (LVNC) cardiomyopathy is a rare form of cardiomyopathy. It is difficult to diagnose prenatally and therefore not well described in the fetal population. There have been a few reports in the literature detailing isolated cases of fetal and neonatal LVNC cardiomyopathy.

Conclusion  With a high index of suspicion, the antenatal diagnosis of noncompaction cardiomyopathy may improve neonatal morbidity and mortality.

R Mohrmann,  Nathaniel K. Jue,  Bryan Williams … (1990)
Isolated noncompaction of left ventricular myocardium is a rare disorder of endomyocardial morphogenesis characterized by numerous, excessively prominent ventricular trabeculations and deep intertrabecular recesses. This study comprised eight cases, including three at necropsy. Ages ranged from 11 months to 22.5 years, with follow-up as long as 5 years. Gross morphological severity ranged from moderately abnormal ventricular trabeculations to profoundly abnormal, loosely compacted trabeculations. Echocardiographic images were diagnostic and corresponded to the morphological appearances at necropsy. The depths of the intertrabecular recesses were assessed by a quantitative echocardiographic X-to-Y ratio and were significantly greater than in normal control subjects (p less than 0.001). Clinical manifestations of the disorder included depressed left ventricular systolic function in five patients, ventricular arrhythmias in five, systemic embolization in three, distinctive facial dysmorphism in three, and familial recurrence in four patients. We conclude that isolated noncompaction of left ventricular myocardium is a rare if not unique disorder with characteristic morphological features that can be identified by two-dimensional echocardiography. The incidence of cardiovascular complications is high. The disorder may be associated with facial dysmorphism and familial recurrence.

Rodrigo Rios,  Allison Cabalka,  Clinton B. Wright … (2007)
Noncompaction of the ventricular myocardium (NCVM) is a rare cardiomyopathy characterized by varying degrees of ventricular dysfunction and numerous, prominent trabeculations with deep intertrabecular recesses caused by arrest in myocardial embryogenesis. NCVM is rarely described in fetal and neonatal patients, and only isolated reports exist to date. We conducted a review of clinical and echocardiographic data from 6 neonates found to have NCVM to elucidate aspects of prenatal manifestations, initial presentations, and clinical course/outcome. Six neonates met criteria for diagnosis of NCVM. Five were initially evaluated during fetal life, whereas one patient presented for initial cardiology examination as a neonate. Three of the 5 fetuses had NCVM recognized at the initial examination. Both unrecognized fetuses also had severe prenatal left ventricular dilation and dysfunction. Left ventricular enlargement or increased wall thickness with decreased ejection fraction was evident in all patients at presentation. Mean ejection fraction at presentation was 36% and improved to 57% during an average follow-up of 2 years. Associated congenital cardiac anomalies were noted in 3 patients. After initial improvement, two patients had transient, late decreases in ejection fraction, which improved with medication adjustment. There have been no deaths. Fetuses with enlarged and poorly functioning left ventricles should be evaluated for NCVM, which may not be easily recognized on initial fetal studies. Unlike previous reports of neonatal NCVM, all 6 neonates, including the 3 requiring inotropic support, showed significant early recovery of cardiac function with aggressive therapy.

Antenatal diagnosis of coarctation of the aorta: a multicenter experience.

Lisa Hornberger,  David Sahn,  Charles Kleinman … (1994)
The purpose of this study was to test observations that might aid prenatal prediction of the presence of coarctation of the aorta in newborn infants with and without other forms of heart disease. Previous reports have suggested that abnormal growth of the aortic arch in utero may be identifiable as a marker for the diagnosis of coarctation. We reviewed the prenatal echocardiograms and postnatal outcome of 20 infants (gestational age at initial study 18 to 36 weeks) with coarctation of the aorta established postnatally, to identify echocardiographic findings that would most facilitate the prenatal diagnosis of coarctation. Associated cardiac lesions included double-inlet left ventricle anatomy (n = 5), double-outlet right ventricle (n = 4), abnormal aortic valve (n = 5), unbalanced atrioventricular canal (n = 3), and membranous ventricular septal defect (n = 1). Chromosomal abnormalities included XO karyotype (n = 1), trisomy 18 (n = 1), and trisomy 21 (n = 1). Hypoplasia determined by measurement of the distal aortic arch was the most frequently observed finding among the fetuses with coarctation. In 12 of 15 fetuses with a well visualized transverse arch at initial prenatal study, the diameter of the transverse arch was < or = 3rd percentile for gestational age as compared with that in a normal group of fetuses. Ten of 10 fetuses with adequate images of the isthmus had isthmus hypoplasia at prenatal study with a diameter < or = 3rd percentile for gestational age. On serial study in six of seven, including three fetuses with normal distal arch measurements at initial study, the distal arch became progressively more hypoplastic for gestational age. In three there was no growth of the transverse arch or isthmus on serial study, and in three there was reversal of flow from antegrade to retrograde through the distal arch. In our study, quantitative hypoplasia of the isthmus and transverse arch was the most consistent observation and therefore the most definitive antenatal sign of postnatal coarctation. The potential for progression of distal arch hypoplasia necessitates serial study in fetuses with associated cardiac and noncardiac lesions.