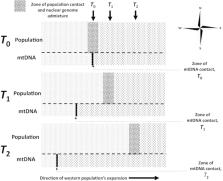 We surveyed mitochondrial, autosomal, and Z chromosome diversity within and between the Copperback Quail‐thrush Cinclosoma clarum and Chestnut Quail‐thrush C. castanotum, which together span the arid and semi‐arid zones of southern Australia, and primarily from specimens held in museum collections. We affirm the recent taxonomic separation of the two species and then focus on diversity within the more widespread of the two species, C. clarum. To guide further study of the system and what it offers to understanding the genomics of the differentiation and speciation processes, we develop and present a hypothesis to explain mitonuclear discordance that emerged in ourdata. Following a period of historical allopatry, secondary contact has resulted in an eastern mitochondrial genome replacing the western mitochondrial genome in western populations. This is predicted under a population‐level invasion in the opposite direction, that of the western population invading the range of the eastern one. Mitochondrial captures can be driven by neutral, demographic processes, or adaptive mechanisms, and we favor the hypothesized capture being driven by neutral means. We cannot fully reject the adaptive process but suggest how these alternatives may be further tested. We acknowledge an alternative hypothesis, which finds some support in phenotypic data published elsewhere, namely that outcomes of secondary contact have been more complex than our current genomic data suggest. Discriminating and reconciling these two alternative hypotheses, which may not be mutually exclusive, could be tested with closer sampling at levels of population, individual, and nucleotide than has so far been possible. This would be further aided by knowledge of the genetic basis to phenotypic variation described elsewhere.

We present a case that within the Copperback Quail‐thrush Cinclosoma clarum, a widespread bird of southern Australia's arid and semi‐arid zones, a mitochondrial capture is taking place driven by neutral demographic processes. This in turn reflects a likely range expansion of the species' western populations into the range of its eastern populations. We can see the need for further analyses to test this hypothesis as well as an alternative and so guide the system's contribution to the genomic study of differentiation and speciation.

Christoph Hahn,  Lutz Bachmann,  Bastien Chevreux (2013)
We present an in silico approach for the reconstruction of complete mitochondrial genomes of non-model organisms directly from next-generation sequencing (NGS) data—mitochondrial baiting and iterative mapping (MITObim). The method is straightforward even if only (i) distantly related mitochondrial genomes or (ii) mitochondrial barcode sequences are available as starting-reference sequences or seeds, respectively. We demonstrate the efficiency of the approach in case studies using real NGS data sets of the two monogenean ectoparasites species Gyrodactylus thymalli and Gyrodactylus derjavinoides including their respective teleost hosts European grayling (Thymallus thymallus) and Rainbow trout (Oncorhynchus mykiss). MITObim appeared superior to existing tools in terms of accuracy, runtime and memory requirements and fully automatically recovered mitochondrial genomes exceeding 99.5% accuracy from total genomic DNA derived NGS data sets in <24 h using a standard desktop computer. The approach overcomes the limitations of traditional strategies for obtaining mitochondrial genomes for species with little or no mitochondrial sequence information at hand and represents a fast and highly efficient in silico alternative to laborious conventional strategies relying on initial long-range PCR. We furthermore demonstrate the applicability of MITObim for metagenomic/pooled data sets using simulated data. MITObim is an easy to use tool even for biologists with modest bioinformatics experience. The software is made available as open source pipeline under the MIT license at https://github.com/chrishah/MITObim.

Rémy Petit,  Laurent Excoffier (2009)
A defining feature of species is that their constituting populations are connected by gene flow. However, interspecific gene flow (introgression) can affect species integrity. If some genome components were less prone to introgression than others, they should be particularly suitable to delimitate species. Recent simulation studies have predicted a negative correlation between intra- and interspecific gene flow, suggesting that markers associated with the most dispersing sex should better delimitate species. A review of studies of introgression in species with sex-biased dispersal largely confirms this prediction. Hence, species delimitation should be more effective with markers experiencing high levels of gene flow, a simple but not widely appreciated prediction.

The hidden side of invasions: massive introgression by local genes.

R Petit,  Mathias Currat,  Laurent Excoffier … (2008)
Despite hundreds of reports involving both plants and animals, the mechanisms underlying introgression remain obscure, even if some form of selection is frequently invoked. Introgression has repeatedly been reported in species that have recently colonized a new habitat, suggesting that demographic processes should be given more attention for understanding the mechanisms of introgression. Here we show by spatially explicit simulations that massive introgression of neutral genes takes place during the invasion of an occupied territory if interbreeding is not severely prevented between the invading and the local species. We also demonstrate that introgression occurs almost exclusively from the local to the invading species, especially for populations located far away from the source of the invasion, and this irrespective of the relative densities of the two species. This pattern is strongest at markers experiencing reduced gene flow, in keeping with the observation that organelle genes are often preferentially introgressed across species boundaries. A survey of the literature shows that a majority of published empirical studies of introgression during range expansions, in animals and in plants, follow the predictions of our model. Our results imply that speciation genes can be identified by comparing genomes of interfertile native and invading species pairs.