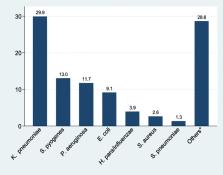 Community acquired pneumonia (CAP) in adults is still a common and serious illness in the sub-Saharan Africa. Identification of the pathogens is crucial in the management of CAP. This study was done to determine the common bacterial pathogens, treatment outcomes and associated factors for microbiological confirmed CAP among adults attending the Bugando Medical Centre and Sekou Toure hospital in the city of Mwanza, Tanzania.

Gram negative bacteria resistant to ampicillin, amoxicillin/clavulanic acid and ceftriaxone were most frequently isolated bacteria among adults’ patients with CAP attending BMC and Sekou Toure hospital. Routine sputum culture should be performed to guide appropriate treatment of CAP among adults in developing countries.

Incidence and characteristics of viral community-acquired pneumonia in adults.

Anja M. Werno,  S Chambers,  Richard Laing … (2007)
In adults, viral causes of community-acquired pneumonia (CAP) are poorly characterised. The aims of this study were to characterise the viral aetiology of CAP in adults by using an extensive array of viral diagnostic tests and to compare the characteristics of viral pneumonia with those of pneumococcal pneumonia. Adults admitted to Christchurch Hospital over a 1-year period with CAP were included in the study. Microbiological testing methods included blood and sputum cultures, urinary antigen testing for Streptococcus pneumoniae and Legionella pneumophila, antibody detection in paired sera and detection of respiratory viruses in nasopharyngeal swabs by immunofluorescence, culture and PCR. Of 304 patients with CAP, a viral diagnosis was made in 88 (29%), with rhinoviruses and influenza A being the most common. Two or more pathogens were detected in 49 (16%) patients, 45 of whom had mixed viral and bacterial infections. There were no reliable clinical predictors of viral pneumonia, although several variables were independently associated with some aetiologies. The presence of myalgia was associated with pneumonia caused by any respiratory virus (OR 3.62, 95% CI 1.29 to 10.12) and influenza pneumonia (OR 190.72, 95% CI 3.68 to 9891.91). Mixed rhinovirus/pneumococcal infection was associated with severe disease. Virus-associated CAP is common in adults. Polymicrobial infections involving bacterial and viral pathogens are frequent and may be associated with severe pneumonia.