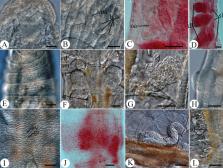 Sudhir Kumar,  Glen Stecher,  Michael KaWah Li … (2018)
The Molecular Evolutionary Genetics Analysis (Mega) software implements many analytical methods and tools for phylogenomics and phylomedicine. Here, we report a transformation of Mega to enable cross-platform use on Microsoft Windows and Linux operating systems. Mega X does not require virtualization or emulation software and provides a uniform user experience across platforms. Mega X has additionally been upgraded to use multiple computing cores for many molecular evolutionary analyses. Mega X is available in two interfaces (graphical and command line) and can be downloaded from www.megasoftware.net free of charge.

Pierre de Wit,  Christer Erséus,  Emilia Rota … (2010)
A multigene data set (12S, 16S, and COI mitochondrial DNA; 18S and 28S nuclear DNA) was analyzed by Bayesian inference to estimate the phylogeny of a sample of the clitellate family Enchytraeidae (86 species representing 14 nominal genera). Monophyly, as well as a basal dichotomy, of the family Enchytraeidae obtained maximum support, with one clade containing Hemienchytraeus and Achaeta, the other the remaining 12 genera analysed. The latter group is basally resolved in several well-supported clades. Lumbricillus and Grania are closely related. Bryodrilus, Oconnorella, Henlea and two species of Marionina (M. cf. riparia, and M. communis) form a well-supported clade. Cognettia is sister to Stercutus, and Cernosvitoviella sister to Mesenchytraeus, and the four together appear to be a monophyletic group. A large part of the taxonomically problematic Marionina appears to be a group not closely related to the type species (M. georgiana), and this group also includes Enchytronia. Further, this Marionina/Enchytronia group appears to be sister to a clade comprising the more or less littoral marine genera Stephensoniella and Enchytraeus. Hemifridericia, Buchholzia and Fridericia, the three genera characterized by two types of coelomocytes, also form a well-supported clade. The study corroborates most of the multi-species genera analysed (Cognettia, Cernosvitoviella, Mesenchytraeus, Oconnorella, Henlea, Enchytraeus, Grania, Buchholzia and Fridericia); only Lumbricillus and Marionina are non-monophyletic as currently defined.