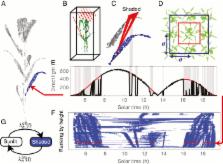 Diurnal changes in solar position and intensity combined with the structural complexity of plant architecture result in highly variable and dynamic light patterns within the plant canopy. This affects productivity through the complex ways that photosynthesis responds to changes in light intensity. Current methods to characterize light dynamics, such as ray-tracing, are able to produce data with excellent spatio-temporal resolution but are computationally intensive and the resulting data are complex and high-dimensional. This necessitates development of more economical models for summarizing the data and for simulating realistic light patterns over the course of a day.

High-resolution reconstructions of field-grown plants are assembled in various configurations to form canopies, and a forward ray-tracing algorithm is applied to the canopies to compute light dynamics at high (1 min) temporal resolution. From the ray-tracer output, the sunlit or shaded state for each patch on the plants is determined, and these data are used to develop a novel stochastic model for the sunlit–shaded patterns. The model is designed to be straightforward to fit to data using maximum likelihood estimation, and fast to simulate from.

For a wide range of contrasting 3-D canopies, the stochastic model is able to summarize, and replicate in simulations, key features of the light dynamics. When light patterns simulated from the stochastic model are used as input to a model of photoinhibition, the predicted reduction in carbon gain is similar to that from calculations based on the (extremely costly) ray-tracer data.

The model provides a way to summarize highly complex data in a small number of parameters, and a cost-effective way to simulate realistic light patterns. Simulations from the model will be particularly useful for feeding into larger-scale photosynthesis models for calculating how light dynamics affects the photosynthetic productivity of canopies.

Improving photosynthesis and crop productivity by accelerating recovery from photoprotection.

Johannes Kromdijk,  Katarzyna Głowacka,  Lauriebeth Leonelli … (2016)
Crop leaves in full sunlight dissipate damaging excess absorbed light energy as heat. When sunlit leaves are shaded by clouds or other leaves, this protective dissipation continues for many minutes and reduces photosynthesis. Calculations have shown that this could cost field crops up to 20% of their potential yield. Here, we describe the bioengineering of an accelerated response to natural shading events in Nicotiana (tobacco), resulting in increased leaf carbon dioxide uptake and plant dry matter productivity by about 15% in fluctuating light. Because the photoprotective mechanism that has been altered is common to all flowering plants and crops, the findings provide proof of concept for a route to obtaining a sustainable increase in productivity for food crops and a much-needed yield jump.

Stomatal size, speed, and responsiveness impact on photosynthesis and water use efficiency.

Tracy Lawson,  R Blatt (2014)
The control of gaseous exchange between the leaf and bulk atmosphere by stomata governs CO₂ uptake for photosynthesis and transpiration, determining plant productivity and water use efficiency. The balance between these two processes depends on stomatal responses to environmental and internal cues and the synchrony of stomatal behavior relative to mesophyll demands for CO₂. Here we examine the rapidity of stomatal responses with attention to their relationship to photosynthetic CO₂ uptake and the consequences for water use. We discuss the influence of anatomical characteristics on the velocity of changes in stomatal conductance and explore the potential for manipulating the physical as well as physiological characteristics of stomatal guard cells in order to accelerate stomatal movements in synchrony with mesophyll CO₂ demand and to improve water use efficiency without substantial cost to photosynthetic carbon fixation. We conclude that manipulating guard cell transport and metabolism is just as, if not more likely to yield useful benefits as manipulations of their physical and anatomical characteristics. Achieving these benefits should be greatly facilitated by quantitative systems analysis that connects directly the molecular properties of the guard cells to their function in the field.

Towards an understanding of photosynthetic acclimation.

G Walters (2004)
It has long been recognized that higher plants vary the composition and organization of the photosynthetic apparatus in response to the prevailing environmental conditions, with particular attention being paid to the responses to incident light. Under high light conditions there are increases in the amounts of photosystems, electron transport and ATP synthase complexes, and enzymes of the Calvin-Benson cycle; conversely, under low light there is an increase in the relative amounts of light-harvesting complexes (LHC) and in the stacking of thylakoid membranes to form grana. It is believed that these changes are of adaptive significance, and in a few instances evidence has been provided that this is indeed the case; an increase in photosynthetic capacity reduces susceptibility to photodamage, while changes in photosystem stoichiometry serve to optimize light utilization. By contrast, the potential benefit to the plant of other changes in chloroplast composition, such as in the levels of LHC, is far less clear. It is also believed that redox signals derived from photosynthetic electron transport play an important regulatory role in acclimation. However, while there is convincing evidence that such redox signals modulate the expression of many plastidic and nuclear genes encoding photosynthetic components, there is little to demonstrate that such changes are responsible for regulating chloroplast composition. This review discusses the evidence that particular aspects of acclimation are advantageous to the plant, and highlights the significant gaps in our understanding of the mechanisms underlying acclimation.