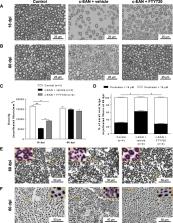 Chronic inflammatory demyelinating polyradiculoneuropathy (CIDP) is an autoimmune-mediated inflammatory disease of the peripheral nervous system characterized by a response directed against certain myelin proteins and for which therapies are limited. Previous studies have suggested a beneficial role of FTY720, a sphingosine 1-phosphate (S1P) receptor agonist, known to deplete lymphocytes from the peripheral blood by sequestering them into lymph nodes, in the treatment of experimental autoimmune neuritis (EAN). Therefore, we investigated whether FTY720 is also beneficial in chronic experimental autoimmune neuritis (c-EAN), a recently developed rat model mimicking human CIDP.

c-EAN was induced in Lewis rats by immunization with S-palm P0(180–199) peptide. Rats were treated with FTY720 (1 mg/kg) or vehicle intraperitoneally once daily from the onset of clinical signs for 18 days; clinical signs were assessed daily until 60 days post-immunization (dpi). Electrophysiological and histological features were examined at different time points. We also evaluated the serum levels of different pro- and anti-inflammatory cytokines by ELISA or flow cytometry at 18, 40, and 60 dpi.

Our data demonstrate that FTY720 decreased the severity and abolished the chronicity of the disease in c-EAN rats. Therapeutic FTY720 treatment reversed electrophysiological and histological anomalies, suggesting that myelinated fibers were subsequently preserved, it inhibited macrophage and IL-17 + cell infiltration in PNS, and it significantly reduced circulating pro-inflammatory cytokines.

FTY720 treatment has beneficial effects on c-EAN, a new animal model mimicking human CIDP. We have shown that FTY720 is an effective immunomodulatory agent, improving the disease course of c-EAN, preserving the myelinated fibers, attenuating the axonal degeneration, and decreasing the number of infiltrated inflammatory cells in peripheral nerves. These data confirm the interest of testing FTY720 or molecules targeting S1P in human peripheral neuropathies.

Hugh Rosen,  J. Hale,  C Keohane … (2002)
Blood lymphocyte numbers, essential for the development of efficient immune responses, are maintained by recirculation through secondary lymphoid organs. We show that lymphocyte trafficking is altered by the lysophospholipid sphingosine-1-phosphate (S1P) and by a phosphoryl metabolite of the immunosuppressive agent FTY720. Both species were high-affinity agonists of at least four of the five S1P receptors. These agonists produce lymphopenia in blood and thoracic duct lymph by sequestration of lymphocytes in lymph nodes, but not spleen. S1P receptor agonists induced emptying of lymphoid sinuses by retention of lymphocytes on the abluminal side of sinus-lining endothelium and inhibition of egress into lymph. Inhibition of lymphocyte recirculation by activation of S1P receptors may result in therapeutically useful immunosuppression.

Thomas Baumruker,  Volker Brinkmann,  P. Hiestand … (2002)
Immunosuppressant drugs such as cyclosporin have allowed widespread organ transplantation, but their utility remains limited by toxicities, and they are ineffective in chronic management of autoimmune diseases such as multiple sclerosis. In contrast, the immune modulating drug FTY720 is efficacious in a variety of transplant and autoimmune models without inducing a generalized immunosuppressed state and is effective in human kidney transplantation. FTY720 elicits a lymphopenia resulting from a reversible redistribution of lymphocytes from circulation to secondary lymphoid tissues by unknown mechanisms. Using FTY720 and several analogs, we show now that FTY720 is phosphorylated by sphingosine kinase; the phosphorylated compound is a potent agonist at four sphingosine 1-phosphate receptors and represents the therapeutic principle in a rodent model of multiple sclerosis. Our results suggest that FTY720, after phosphorylation, acts through sphingosine 1-phosphate signaling pathways to modulate chemotactic responses and lymphocyte trafficking.

Shannon E Gardell,  Yue M. Lu,  Sharlene S. L. Teo … (2011)
Sphingosine 1-phosphate (S1P), a lysophospholipid, has gained relevance to multiple sclerosis through the discovery of FTY720 (fingolimod), recently approved as an oral treatment for relapsing forms of multiple sclerosis. Its mechanism of action is thought to be immunological through an active phosphorylated metabolite, FTY720-P, that resembles S1P and alters lymphocyte trafficking through receptor subtype S1P(1). However, previously reported expression and in vitro studies of S1P receptors suggested that direct CNS effects of FTY720 might theoretically occur through receptor modulation on neurons and glia. To identify CNS cells functionally contributing to FTY720 activity, genetic approaches were combined with cellular and molecular analyses. These studies relied on the functional assessment, based on clinical score, of conditional null mouse mutants lacking S1P(1) in CNS cell lineages and challenged by experimental autoimmune encephalomyelitis (EAE), an animal model of multiple sclerosis. All conditional null mutants displayed WT lymphocyte trafficking that responded normally to FTY720. In marked contrast, EAE was attenuated and FTY720 efficacy was lost in CNS mutants lacking S1P(1) on GFAP-expressing astrocytes but not on neurons. In situ hybridization studies confirmed that astrocyte loss of S1P(1) was the key alteration in functionally affected mutants. Reductions in EAE clinical scores were paralleled by reductions in demyelination, axonal loss, and astrogliosis. Receptor rescue and pharmacological experiments supported the loss of S1P(1) on astrocytes through functional antagonism by FTY720-P as a primary FTY720 mechanism. These data identify nonimmunological CNS mechanisms of FTY720 efficacy and implicate S1P signaling pathways within the CNS as targets for multiple sclerosis therapies.