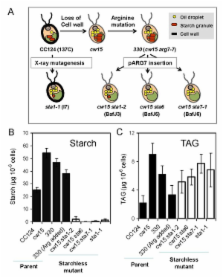 When cultivated under stress conditions, many microalgae species accumulate both starch and oil (triacylglycerols). The model green microalga Chlamydomonas reinhardtii has recently emerged as a model to test genetic engineering or cultivation strategies aiming at increasing lipid yields for biodiesel production. Blocking starch synthesis has been suggested as a way to boost oil accumulation. Here, we characterize the triacylglycerol (TAG) accumulation process in Chlamydomonas and quantify TAGs in various wild-type and starchless strains.

In response to nitrogen deficiency, Chlamydomonas reinhardtii produced TAGs enriched in palmitic, oleic and linoleic acids that accumulated in oil-bodies. Oil synthesis was maximal between 2 and 3 days following nitrogen depletion and reached a plateau around day 5. In the first 48 hours of oil deposition, a ~80% reduction in the major plastidial membrane lipids occurred. Upon nitrogen re-supply, mobilization of TAGs started after starch degradation but was completed within 24 hours. Comparison of oil content in five common laboratory strains (CC124, CC125, cw15, CC1690 and 11-32A) revealed a high variability, from 2 μg TAG per million cell in CC124 to 11 μg in 11-32A. Quantification of TAGs on a cell basis in three mutants affected in starch synthesis ( cw15sta1-2, cw15sta6 and cw15sta7-1) showed that blocking starch synthesis did not result in TAG over-accumulation compared to their direct progenitor, the arginine auxotroph strain 330. Moreover, no significant correlation was found between cellular oil and starch levels among the twenty wild-type, mutants and complemented strains tested. By contrast, cellular oil content was found to increase steeply with salt concentration in the growth medium. At 100 mM NaCl, oil level similar to nitrogen depletion conditions could be reached in CC124 strain.

A reference basis for future genetic studies of oil metabolism in Chlamydomonas is provided. Results highlight the importance of using direct progenitors as control strains when assessing the effect of mutations on oil content. They also suggest the existence in Chlamydomonas of complex interplays between oil synthesis, genetic background and stress conditions. Optimization of such interactions is an alternative to targeted metabolic engineering strategies in the search for high oil yields.

A rapid method of total lipid extraction and purification.

Yusuf Chisti (2015)
Continued use of petroleum sourced fuels is now widely recognized as unsustainable because of depleting supplies and the contribution of these fuels to the accumulation of carbon dioxide in the environment. Renewable, carbon neutral, transport fuels are necessary for environmental and economic sustainability. Biodiesel derived from oil crops is a potential renewable and carbon neutral alternative to petroleum fuels. Unfortunately, biodiesel from oil crops, waste cooking oil and animal fat cannot realistically satisfy even a small fraction of the existing demand for transport fuels. As demonstrated here, microalgae appear to be the only source of renewable biodiesel that is capable of meeting the global demand for transport fuels. Like plants, microalgae use sunlight to produce oils but they do so more efficiently than crop plants. Oil productivity of many microalgae greatly exceeds the oil productivity of the best producing oil crops. Approaches for making microalgal biodiesel economically competitive with petrodiesel are discussed.

The Chlamydomonas genome reveals the evolution of key animal and plant functions.

Simon E Prochnik,  Michael Schroda,  Gerald Page … (2007)
Chlamydomonas reinhardtii is a unicellular green alga whose lineage diverged from land plants over 1 billion years ago. It is a model system for studying chloroplast-based photosynthesis, as well as the structure, assembly, and function of eukaryotic flagella (cilia), which were inherited from the common ancestor of plants and animals, but lost in land plants. We sequenced the approximately 120-megabase nuclear genome of Chlamydomonas and performed comparative phylogenomic analyses, identifying genes encoding uncharacterized proteins that are likely associated with the function and biogenesis of chloroplasts or eukaryotic flagella. Analyses of the Chlamydomonas genome advance our understanding of the ancestral eukaryotic cell, reveal previously unknown genes associated with photosynthetic and flagellar functions, and establish links between ciliopathy and the composition and function of flagella.