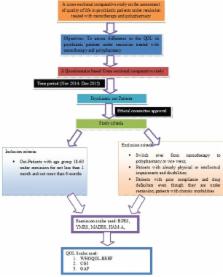 The concept of quality of life (QoL) is becoming an important measure of the impact of psychiatric disorders. It is natural that once patient achieves remission, QoL would improve, but very few studies are conducted under this phase. This study compares the differences in QoL in remitted patients with monotherapy and polypharmacy.

The aim of this study is to compare the QoL between psychiatric patients in remission treated with monotherapy and polypharmacy.

It is a questionnaire based cross-sectional comparative study.

Patients treated with polypharmacy had better QoL and also clinical improvement and functioning levels were superior.

A new depression scale designed to be sensitive to change.

Polly S. Montgomery,  M Åsberg (1979)
The construction of a depression rating scale designed to be particularly sensitive to treatment effects is described. Ratings of 54 English and 52 Swedish patients on a 65 item comprehensive psychopathology scale were used to identify the 17 most commonly occurring symptoms in primary depressive illness in the combined sample. Ratings on these 17 items for 64 patients participating in studies of four different antidepressant drugs were used to create a depression scale consisting of the 10 items which showed the largest changes with treatment and the highest correlation to overall change. The inner-rater reliability of the new depression scale was high. Scores on the scale correlated significantly with scores on a standard rating scale for depression, the Hamilton Rating Scale (HRS), indicating its validity as a general severity estimate. Its capacity to differentiate between responders and non-responders to antidepressant treatment was better than the HRS, indicating greater sensitivity to change. The practical and ethical implications in terms of smaller sample sizes in clinical trials are discussed.

A rating scale for mania: reliability, validity and sensitivity.

Fenja Ziegler,  Paul R Young,  Patrick J. Biggs … (1978)
An eleven item clinician-administered Mania Rating Scale (MRS) is introduced, and its reliability, validity and sensitivity are examined. There was a high correlation between the scores of two independent clinicians on both the total score (0.93) and the individual item scores (0.66 to 0.92). The MRS score correlated highly with an independent global rating, and with scores of two other mania rating scales administered concurrently. The score also correlated with the number of days of subsequent stay in hospital. It was able to differentiate statistically patients before and after two weeks of treatment and to distinguish levels of severity based on the global rating.

The Yale-Brown Obsessive Compulsive Scale. I. Development, use, and reliability.