From Monocytes to M1/M2 Macrophages: Phenotypical vs. Functional Differentiation 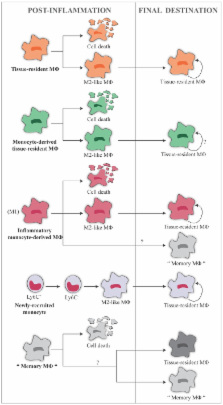 Studies on monocyte and macrophage biology and differentiation have revealed the pleiotropic activities of these cells. Macrophages are tissue sentinels that maintain tissue integrity by eliminating/repairing damaged cells and matrices. In this M2-like mode, they can also promote tumor growth. Conversely, M1-like macrophages are key effector cells for the elimination of pathogens, virally infected, and cancer cells. Macrophage differentiation from monocytes occurs in the tissue in concomitance with the acquisition of a functional phenotype that depends on microenvironmental signals, thereby accounting for the many and apparently opposed macrophage functions. Many questions arise. When monocytes differentiate into macrophages in a tissue (concomitantly adopting a specific functional program, M1 or M2), do they all die during the inflammatory reaction, or do some of them survive? Do those that survive become quiescent tissue macrophages, able to react as naïve cells to a new challenge? Or, do monocyte-derived tissue macrophages conserve a “memory” of their past inflammatory activation? This review will address some of these important questions under the general framework of the role of monocytes and macrophages in the initiation, development, resolution, and chronicization of inflammation.

Miriam Merad,  frederic geissmann,  Markus Manz … (2010)
Monocytes and macrophages are critical effectors and regulators of inflammation and the innate immune response, the immediate arm of the immune system. Dendritic cells initiate and regulate the highly pathogen-specific adaptive immune responses and are central to the development of immunologic memory and tolerance. Recent in vivo experimental approaches in the mouse have unveiled new aspects of the developmental and lineage relationships among these cell populations. Despite this, the origin and differentiation cues for many tissue macrophages, monocytes, and dendritic cell subsets in mice, and the corresponding cell populations in humans, remain to be elucidated.

John MacMicking,  Qiao-wen Xie,  Carl Nathan (1997)
At the interface between the innate and adaptive immune systems lies the high-output isoform of nitric oxide synthase (NOS2 or iNOS). This remarkable molecular machine requires at least 17 binding reactions to assemble a functional dimer. Sustained catalysis results from the ability of NOS2 to attach calmodulin without dependence on elevated Ca2+. Expression of NOS2 in macrophages is controlled by cytokines and microbial products, primarily by transcriptional induction. NOS2 has been documented in macrophages from human, horse, cow, goat, sheep, rat, mouse, and chicken. Human NOS2 is most readily observed in monocytes or macrophages from patients with infectious or inflammatory diseases. Sustained production of NO endows macrophages with cytostatic or cytotoxic activity against viruses, bacteria, fungi, protozoa, helminths, and tumor cells. The antimicrobial and cytotoxic actions of NO are enhanced by other macrophage products such as acid, glutathione, cysteine, hydrogen peroxide, or superoxide. Although the high-output NO pathway probably evolved to protect the host from infection, suppressive effects on lymphocyte proliferation and damage to other normal host cells confer upon NOS2 the same protective/destructive duality inherent in every other major component of the immune response.

Charles Krieger,  Franklyn Bennett,  Wolfram Tetzlaff … (2007)
Microgliosis is a common response to multiple types of damage in the CNS. However, the origin of the cells involved in this process is still controversial and the relative importance of local expansion versus recruitment of microglia progenitors from the bloodstream is unclear. Here, we investigated the origin of microglia using chimeric animals obtained by parabiosis. We found no evidence of microglia progenitor recruitment from the circulation in denervation or CNS neurodegenerative disease, suggesting that maintenance and local expansion of microglia are solely dependent on the self-renewal of CNS resident cells in these models.

This article was submitted to Inflammation, a section of the journal Frontiers in Immunology.