Global distribution maps of the leishmaniases 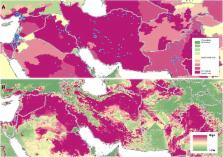 The leishmaniases are vector-borne diseases that have a broad global distribution throughout much of the Americas, Africa, and Asia. Despite representing a significant public health burden, our understanding of the global distribution of the leishmaniases remains vague, reliant upon expert opinion and limited to poor spatial resolution. A global assessment of the consensus of evidence for leishmaniasis was performed at a sub-national level by aggregating information from a variety of sources. A database of records of cutaneous and visceral leishmaniasis occurrence was compiled from published literature, online reports, strain archives, and GenBank accessions. These, with a suite of biologically relevant environmental covariates, were used in a boosted regression tree modelling framework to generate global environmental risk maps for the leishmaniases. These high-resolution evidence-based maps can help direct future surveillance activities, identify areas to target for disease control and inform future burden estimation efforts.

Each year 1–2 million people are diagnosed with a tropical disease called leishmaniasis, which is caused by single-celled parasites. People are infected when they are bitten by sandflies carrying the parasite, and often develop skin lesions around the bite site. Though mild cases may recover on their own or with treatment, sometimes the parasites multiply and spread elsewhere causing further skin lesions and facial disfigurement. Furthermore, the parasites can also infect internal organs such as the spleen and the liver, which without treatment can be fatal.

The parasites that cause leishmaniasis are found in 88 countries around the world, mainly in South and Central America, Africa, Asia, and southern Europe. However, over 90% of potentially fatal infections occur in just six countries: Brazil, Ethiopia, Sudan, South Sudan, India, and Bangladesh. Although a few studies have looked at the distribution of leishmaniasis within different countries, we still do not have a complete picture of the distribution of the disease on a global scale.

To address this, Pigott et al. set out to create detailed maps of the distribution of leishmaniasis and the factors that promote its spread. Similar techniques had been previously used to map dengue fever, another tropical disease. Computer modelling was used to generate the maps based on data about the environment at the locations of known cases of leishmaniasis. This information was then used to infer the likelihood of leishmaniasis being present at other locations across the globe.

Based on their maps, Pigott et al. estimate that about 1.7 billion people, or one quarter of the world's population, live in areas where they are at potential risk of leishmaniasis. People living in built-up areas outside of cities are at the greatest risk, likely because some sandfly species prefer to live near dwellings, but other social and economic factors also contribute to the risk of catching this disease.

The factors driving the transmission of leishmaniasis differed in the Old World (Europe, Africa and Asia) and the New World (the Americas): built-up areas were more likely to be at risk in the Old World, while temperature and rainfall were bigger factors affecting risk in the New World. It is hoped that the maps created by Pigott et al. will help inform future estimates of the burden of leishmaniasis and target surveillance and disease control efforts more effectively to combat this tropical disease.

Selecting pseudo-absences for species distribution models: how, where and how many?

Marianne Sinka,  Michael J Bangs,  Sylvie Manguin … (2011)
Background This is the second in a series of three articles documenting the geographical distribution of 41 dominant vector species (DVS) of human malaria. The first paper addressed the DVS of the Americas and the third will consider those of the Asian Pacific Region. Here, the DVS of Africa, Europe and the Middle East are discussed. The continent of Africa experiences the bulk of the global malaria burden due in part to the presence of the An. gambiae complex. Anopheles gambiae is one of four DVS within the An. gambiae complex, the others being An. arabiensis and the coastal An. merus and An. melas. There are a further three, highly anthropophilic DVS in Africa, An. funestus, An. moucheti and An. nili. Conversely, across Europe and the Middle East, malaria transmission is low and frequently absent, despite the presence of six DVS. To help control malaria in Africa and the Middle East, or to identify the risk of its re-emergence in Europe, the contemporary distribution and bionomics of the relevant DVS are needed. Results A contemporary database of occurrence data, compiled from the formal literature and other relevant resources, resulted in the collation of information for seven DVS from 44 countries in Africa containing 4234 geo-referenced, independent sites. In Europe and the Middle East, six DVS were identified from 2784 geo-referenced sites across 49 countries. These occurrence data were combined with expert opinion ranges and a suite of environmental and climatic variables of relevance to anopheline ecology to produce predictive distribution maps using the Boosted Regression Tree (BRT) method. Conclusions The predicted geographic extent for the following DVS (or species/suspected species complex*) is provided for Africa: Anopheles (Cellia) arabiensis, An. (Cel.) funestus*, An. (Cel.) gambiae, An. (Cel.) melas, An. (Cel.) merus, An. (Cel.) moucheti and An. (Cel.) nili*, and in the European and Middle Eastern Region: An. (Anopheles) atroparvus, An. (Ano.) labranchiae, An. (Ano.) messeae, An. (Ano.) sacharovi, An. (Cel.) sergentii and An. (Cel.) superpictus*. These maps are presented alongside a bionomics summary for each species relevant to its control.

Marianne Sinka,  Michael J Bangs,  Sylvie Manguin … (2011)
Background The final article in a series of three publications examining the global distribution of 41 dominant vector species (DVS) of malaria is presented here. The first publication examined the DVS from the Americas, with the second covering those species present in Africa, Europe and the Middle East. Here we discuss the 19 DVS of the Asian-Pacific region. This region experiences a high diversity of vector species, many occurring sympatrically, which, combined with the occurrence of a high number of species complexes and suspected species complexes, and behavioural plasticity of many of these major vectors, adds a level of entomological complexity not comparable elsewhere globally. To try and untangle the intricacy of the vectors of this region and to increase the effectiveness of vector control interventions, an understanding of the contemporary distribution of each species, combined with a synthesis of the current knowledge of their behaviour and ecology is needed. Results Expert opinion (EO) range maps, created with the most up-to-date expert knowledge of each DVS distribution, were combined with a contemporary database of occurrence data and a suite of open access, environmental and climatic variables. Using the Boosted Regression Tree (BRT) modelling method, distribution maps of each DVS were produced. The occurrence data were abstracted from the formal, published literature, plus other relevant sources, resulting in the collation of DVS occurrence at 10116 locations across 31 countries, of which 8853 were successfully geo-referenced and 7430 were resolved to spatial areas that could be included in the BRT model. A detailed summary of the information on the bionomics of each species and species complex is also presented. Conclusions This article concludes a project aimed to establish the contemporary global distribution of the DVS of malaria. The three articles produced are intended as a detailed reference for scientists continuing research into the aspects of taxonomy, biology and ecology relevant to species-specific vector control. This research is particularly relevant to help unravel the complicated taxonomic status, ecology and epidemiology of the vectors of the Asia-Pacific region. All the occurrence data, predictive maps and EO-shape files generated during the production of these publications will be made available in the public domain. We hope that this will encourage data sharing to improve future iterations of the distribution maps.

This is an open-access article, free of all copyright, and may be freely reproduced, distributed, transmitted, modified, built upon, or otherwise used by anyone for any lawful purpose. The work is made available under the Creative Commons CC0 public domain dedication .