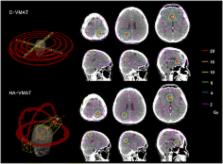 The HyperArc VMAT (HA-VMAT) planning approach was newly developed to fulfill the demands of dose delivery for brain metastases stereotactic radiosurgery. We compared the dosimetric parameters of the HA-VMAT plan with those of the conventional VMAT (C-VMAT).

Adjuvant whole-brain radiotherapy versus observation after radiosurgery or surgical resection of one to three cerebral metastases: results of the EORTC 22952-26001 study.

D. Berge,  Riccardo Soffietti,  Tzahala Tzuk-Shina … (2011)
This European Organisation for Research and Treatment of Cancer phase III trial assesses whether adjuvant whole-brain radiotherapy (WBRT) increases the duration of functional independence after surgery or radiosurgery of brain metastases. Patients with one to three brain metastases of solid tumors (small-cell lung cancer excluded) with stable systemic disease or asymptomatic primary tumors and WHO performance status (PS) of 0 to 2 were treated with complete surgery or radiosurgery and randomly assigned to adjuvant WBRT (30 Gy in 10 fractions) or observation (OBS). The primary end point was time to WHO PS deterioration to more than 2. Of 359 patients, 199 underwent radiosurgery, and 160 underwent surgery. In the radiosurgery group, 100 patients were allocated to OBS, and 99 were allocated to WBRT. After surgery, 79 patients were allocated to OBS, and 81 were allocated to adjuvant WBRT. The median time to WHO PS more than 2 was 10.0 months (95% CI, 8.1 to 11.7 months) after OBS and 9.5 months (95% CI, 7.8 to 11.9 months) after WBRT (P = .71). Overall survival was similar in the WBRT and OBS arms (median, 10.9 v 10.7 months, respectively; P = .89). WBRT reduced the 2-year relapse rate both at initial sites (surgery: 59% to 27%, P < .001; radiosurgery: 31% to 19%, P = .040) and at new sites (surgery: 42% to 23%, P = .008; radiosurgery: 48% to 33%, P = .023). Salvage therapies were used more frequently after OBS than after WBRT. Intracranial progression caused death in 78 (44%) of 179 patients in the OBS arm and in 50 (28%) of 180 patients in the WBRT arm. After radiosurgery or surgery of a limited number of brain metastases, adjuvant WBRT reduces intracranial relapses and neurologic deaths but fails to improve the duration of functional independence and overall survival.