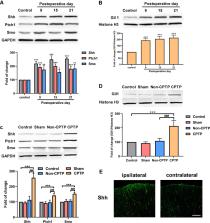 Some patients undergoing thoracotomy may suffer from chronic post-thoracotomy pain (CPTP). Treatment of CPTP has been a clinical challenge and the underlying mechanisms of CPTP remain elusive. Recently, sonic hedgehog (Shh) signaling has been shown to be associated with various pain states but its role in the pathogenesis of CPTP is still unclear.

Tony L. Yaksh,  Thomas A. Rudy (1976)
To administer drugs into the spinal subarachnoid space of unanesthetized and intact rats and rabbits, a procedure is described whereby a polyethylene catheter (PE-10) may be inserted through a puncture of the atlanto-occipital membrane and secured to the skull. Calibration experiments carried out with bromophenol blue dye, 3H-naloxone and 14C-urea revealed first, that there was little rostro-caudal diffusion of the injectate along the spinal axis and secondly, that even for compounds such as naloxone which can rapidly permeate neural tissues, the levels which do appear in the brain are small following the spinal subarachnoid administration of the drug. Control injections, administered either acutely or repeatedly over a prolonged period of time, had no detectable effect on the animal's behavior. These observations, as well as the lack of pathology in the spinal cords of rats having such catheters for periods of up to 4 months suggests that the implant is well tolerated.

Chronic post-thoracotomy pain: a critical review of pathogenic mechanisms and strategies for prevention.

Jesper Ravn,  Henrik Kehlet,  Kim Wildgaard (2009)
Chronic pain complaints after thoracic surgery represent a significant clinical problem in 25-60% of patients. Results from thoracic and other surgical procedures suggest multiple pathogenic mechanisms that include pre-, intra-, and postoperative factors. This review attempts to analyse the methodology and systematics of the studies on the post-thoracotomy pain syndrome (PTPS) after lung cancer surgery in adults, in order to clarify the relative role of possible pathogenic factors and to define future strategies for prevention. Literature published from 2000 to 2008 together with studies included in previous systematic reviews was searched recursively using PubMed and OVID by combining three categories of search terms. The available data have major inconsistencies in collection of pre-, intra- and postoperative data that may influence PTPS, thereby hindering precise conclusions as well as preventive and treatment strategies. However, intercostal nerve injury seems to be the most important pathogenic factor. Since there is a general agreement on the clinical relevance of PTPS, a proposal for design of future trials is presented.