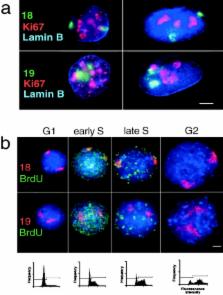 Using fluorescence in situ hybridization we show striking differences in nuclear position, chromosome morphology, and interactions with nuclear substructure for human chromosomes 18 and 19. Human chromosome 19 is shown to adopt a more internal position in the nucleus than chromosome 18 and to be more extensively associated with the nuclear matrix. The more peripheral localization of chromosome 18 is established early in the cell cycle and is maintained thereafter. We show that the preferential localization of chromosomes 18 and 19 in the nucleus is reflected in the orientation of translocation chromosomes in the nucleus. Lastly, we show that the inhibition of transcription can have gross, but reversible, effects on chromosome architecture. Our data demonstrate that the distribution of genomic sequences between chromosomes has implications for nuclear structure and we discuss our findings in relation to a model of the human nucleus that is functionally compartmentalized.

Replicon Clusters Are Stable Units of Chromosome Structure: Evidence That Nuclear Organization Contributes to the Efficient Activation and Propagation of S Phase in Human Cells

J Sédat,  Katharine Belmont,  Shauna Murray … (1997)
Structural studies of fixed cells have revealed that interphase chromosomes are highly organized into specific arrangements in the nucleus, and have led to a picture of the nucleus as a static structure with immobile chromosomes held in fixed positions, an impression apparently confirmed by recent photobleaching studies. Functional studies of chromosome behavior, however, suggest that many essential processes, such as recombination, require interphase chromosomes to move around within the nucleus. To reconcile these contradictory views, we exploited methods for tagging specific chromosome sites in living cells of Saccharomyces cerevisiae with green fluorescent protein and in Drosophila melanogaster with fluorescently labeled topoisomerase ll. Combining these techniques with submicrometer single-particle tracking, we directly measured the motion of interphase chromatin, at high resolution and in three dimensions. We found that chromatin does indeed undergo significant diffusive motion within the nucleus, but this motion is constrained such that a given chromatin segment is free to move within only a limited subregion of the nucleus. Chromatin diffusion was found to be insensitive to metabolic inhibitors, suggesting that it results from classical Brownian motion rather than from active motility. Nocodazole greatly reduced chromatin confinement, suggesting a role for the cytoskeleton in the maintenance of nuclear architecture. We conclude that chromatin is free to undergo substantial Brownian motion, but that a given chromatin segment is confined to a subregion of the nucleus. This constrained diffusion is consistent with a highly defined nuclear architecture, but also allows enough motion for processes requiring chromosome motility to take place. These results lead to a model for the regulation of chromosome interactions by nuclear architecture.

Karen E Brown,  Simon Guest,  Stephen T. Smale … (1997)
Ikaros proteins are required for normal T, B, and NK cell development and are postulated to activate lymphocyte-specific gene expression. Here we examined Ikaros distribution in the nucleus of B lymphocytes using confocal microscopy and a novel immunofluorescence in situ hybridization (immuno-FISH) approach. Unexpectedly, Ikaros localized to discrete heterochromatin-containing foci in interphase nuclei, which comprise clusters of centromeric DNA as defined by gamma-satellite sequences and the abundance of heterochromatin protein-1 (HP-1). Using locus-specific probes for CD2, CD4, CD8alpha, CD19, CD45, and lambda5 genes, we show that transcriptionally inactive but not transcriptionally active genes associate with Ikaros-heterochromatin foci. These findings support a model of organization of the nucleus in which repressed genes are selectively recruited into centromeric domains.