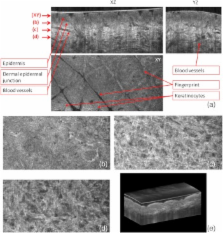 Melissa K. Gregory,  J. Swanson,  S. Lin … (1991)
A technique called optical coherence tomography (OCT) has been developed for noninvasive cross-sectional imaging in biological systems. OCT uses low-coherence interferometry to produce a two-dimensional image of optical scattering from internal tissue microstructures in a way that is analogous to ultrasonic pulse-echo imaging. OCT has longitudinal and lateral spatial resolutions of a few micrometers and can detect reflected signals as small as approximately 10(-10) of the incident optical power. Tomographic imaging is demonstrated in vitro in the peripapillary area of the retina and in the coronary artery, two clinically relevant examples that are representative of transparent and turbid media, respectively.

Incidence estimate of nonmelanoma skin cancer in the United States, 2006.

M Coldiron,  Steven Feldman,  Alan Fleischer … (2010)
To estimate the incidence of nonmelanoma skin cancer (NMSC) in the US population in 2006 and secondarily to indicate trends in numbers of procedures for skin cancer treatment. A descriptive analysis of population-based claims and US Census Bureau data combined with a population-based cross-sectional survey using multiple US government data sets, including the Centers for Medicare and Medicaid Services Fee-for-Service Physicians Claims databases, to calculate totals of skin cancer procedures performed for Medicare beneficiaries in 1992 and from 1996 to 2006 and related parameters. The National Ambulatory Medical Care Service database was used to estimate NMSC-related office visits. We combined these to estimate totals of new skin cancer diagnoses and affected individuals in the overall US population. The total number of procedures for skin cancer in the Medicare fee-for-service population increased by 76.9% from 1 158 298 in 1992 to 2 048 517 in 2006. The age-adjusted procedure rate per year per 100 000 beneficiaries increased from 3514 in 1992 to 6075 in 2006. From 2002 to 2006 (the years for which the databases allow procedure linkage to patient demographics and diagnoses), the number of procedures for NMSC in the Medicare population increased by 16.0%. In this period, the number of procedures per affected patient increased by 1.5%, and the number of persons with at least 1 procedure increased by 14.3%. We estimate the total number of NMSCs in the US population in 2006 at 3 507 693 and the total number of persons in the United States treated for NMSC at 2 152 500. The number of skin cancers in Medicare beneficiaries increased dramatically over the years 1992 to 2006, due mainly to an increase in the number of affected individuals. Using nationally representative databases, we provide evidence of much higher overall totals of skin cancer diagnoses and patients in the US population than previous estimates. These data give the most complete evaluation to date of the underrecognized epidemic of skin cancer in the United States.

Kimberly J. Nelson,  S. Xiang,  C Saxer … (2000)
We have developed a novel phase-resolved optical coherence tomography (OCT) and optical Doppler tomography (ODT) system that uses phase information derived from a Hilbert transformation to image blood flow in human skin with fast scanning speed and high velocity sensitivity. Using the phase change between sequential scans to construct flow-velocity imaging, this technique decouples spatial resolution and velocity sensitivity in flow images and increases imaging speed by more than 2 orders of magnitude without compromising spatial resolution or velocity sensitivity. The minimum flow velocity that can be detected with an axial-line scanning speed of 400 Hz and an average phase change over eight sequential scans is as low as 10 microm/s, while a spatial resolution of 10 microm is maintained. Using this technique, we present what are to our knowledge the first phase-resolved OCT/ODT images of blood flow in human skin.